The holiday quarter of 2015 (fiscal Q1 2016) turned out to be better or in line with what Wall Street analysts expected, but as of writing this article Apple’s stock price is down 5.72% to $94.27. Analysts, instead of addressing the most profitable quarter Apple has had, focused on the company’s guidance for the second fiscal quarter, which was low enough to immediately ignite a discussion during the earnings call. 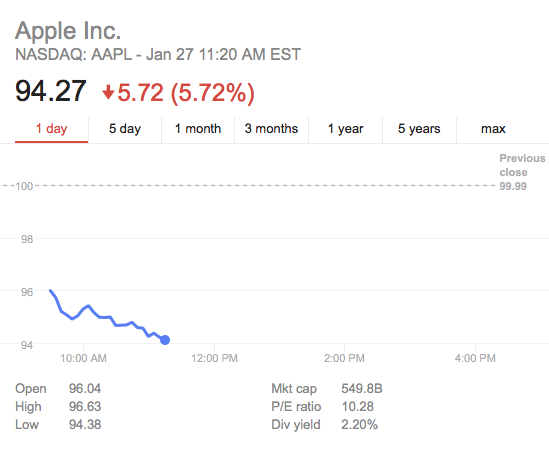 Fortune’s Philip Elmer-DeWitt has gathered some of the analyst reports sent out today to investors. While the majority of analysts included in the roundup kept their positive ratings, they also cut their price targets.

Katy Huberty of Morgan Stanley says Apple’s March guidance is better than expected, and she highlights the growing user base, accelerating service revenue, and the new iPhones that are coming later this year.

Gene Munster, Piper Jaffray: Guide Implies iPhones Better Than Expected, But Macro Commentary Weighs. Shares of AAPL are trading down ~3% in the aftermarket despite the company guiding iPhone ahead of buy side expectations. We believe Apple’s insistence on broader macroeconomic headwinds may have spooked investors and resulted in the June number not being de-risked as we previously expected. If the macro headwinds continue to be an issue for AAPL, we would expect it to impact the entire market and would still view AAPL as a relative winner even in a down market environment as we believe tech investors would view the safety of Apple’s capital return program as a positive.

Daniel Ives of FBR says Apple has delivered a respectable quarter (Q1 2016), but “the quarter took a back seat to March guidance, which was the Street’s focus as Cook finally ripped the band-aid off and lowered Cupertino’s outlook based on softer 6s demand and a choppy macro.”