After six years of waiting, Apple finally announced that China Mobile, the largest wireless carrier in the world, will carry both the iPhone 5C and iPhone 5S on its 3G and 4G networks starting January, 2014, with pre-orders beginning on Christmas Day on China Mobile’s website and customer service hotline. Following the big news, Apple’s shares (AAPL) soared 3.4% ($18.86) when the market opened this morning. 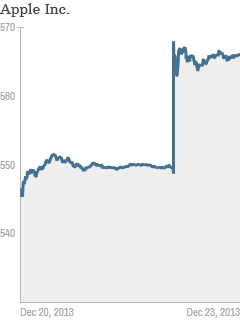 Fortune’s Philip Elmer-Dewitt suggests that Apple may have deliberately delayed the deal until supplies had caught up with demand elsewhere. Nonetheless, the deal has now finally been signed and Apple can look forward to a record breaking quarter in terms of iPhone sales once the handsets go on sale next month. The publication has also shared some excerpts from analysts like Brian White, among others, who has changed his Apple stock rating to ‘buy’ with a $777 price target.

Brian White, Canter Fitzgerald: Apple & China Mobile Saddle Up the iPhone for the Year of the Horse — Giddy Up! “In our view, this agreement is well timed for the Chinese New Year that begins on January 31, 2014, the year of the “horse”. In our view, this has been the most difficult carrier agreement for Apple to negotiate in its history; however, we believe the opportunity for the iPhone to expand its reach within China Mobile’s wireless subscriber base will prove to be well worth the wait.” Rating: Buy. Price target: $777.

Gene Munster, Piper Jaffray: China Mobile Deal Signed; Should Add 5% To Street Revenue In 2014. “We believe China Mobile should add 5% to Street 2014 revenue estimates. While we have a high degree of confidence that China Mobile will be additive to Street numbers in 2014, we are taking a conservative approach and leaving our estimates unchanged until Apple reports.” Overweight. $640.

A China Mobile official also noted that he sees 2014 as a year where “Apple regains its product mojo” including a larger screen iPhone, an iWatch and a long-awaited low- cost iPhone.