Google announced today that it is rolling out six new features for the 3+ billion devices out in the world running on Android. 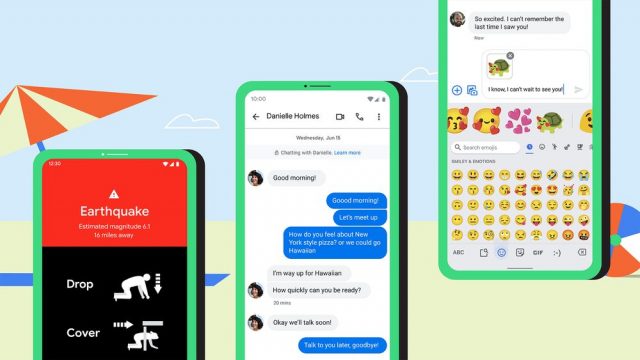 Six new features will be rolling out to Android, including end-to-end encryption in Messages, improvements to Android Auto, Voice Access, Assistant and Emojis, and earthquake alerts to more countries, explains a new report.

“We’re making your phone more useful this summer with features designed to improve the way you experience the world,” the Android website notes of the updates. “Like the global launch of earthquake alerts. Starred messages to help you keep track of what’s important. And so much more. Here are the latest features available on your Android phone.”

Android’s new Android Earthquake Alerts System is now rolling out in Turkey, the Philippines, Kazakhstan, Kyrgyz Republic, Tajikistan, Turkmenistan, and Uzbekistan after previously launching in New Zealand and Greece. Google says it is prioritizing launching Earthquake Alerts in countries with higher earthquake risks, and it hopes to launch in more countries over the coming year.

Second, Messages will now let users “star” important messages so they can find them again more easily. Starred messages will be viewable separately in a categories view.

Third, “Contextual Emoji Kitchen” suggestions are available in Gboard beta today and are coming to all Gboard users this summer for messages written in English, Spanish and Portuguese on devices running Android 6.0 and above.

Android is also adding Voice shortcuts for apps, allowing users to ask Google to open or search many of their favorite apps using their voice.

Next, Android is adding improved password input and gaze detection on Voice Access. And gaze detection, now in beta, lets you ask Voice Access to work only when you are looking at the screen so you can more naturally move between talking to people around and using your phone.

Check out the entire announcement over at Google’s blog.