Information about the pre-iPhone era of Android phones is scarce, but as previous reports have highlighted, they looked so “nineties” after Steve Jobs’ legendary unveiling of the iPhone, the handset that set the new smartphone standard.

The second round of the Apple vs. Samsung trial has uncovered some interesting details about the early days of Android, and AppleInsider has obtained a copy of Google’s internal “software functional requirements”, which reveals why the Android phone looked so “nineties” in 2007 when the iPhone was launched.

As it turns out, Android as we know it was nowhere in 2006. The internal documents reveal the mobile OS founded by Andy Rubin had no support for touch screens, and that the phone was designed with the “presence of discrete physical buttons as an assumption. However, there is nothing fundamental in the Product’s architecture that prevents the support of touchscreens in the future.”

Google planned to essentially use existing reference designs for Windows Mobile Smartphone hardware and install Android as Sun’s Java Mobile running on Linux. The 2006 definition flatly specifies “the Platform will be compatible with Java Platform, Micro Edition (Java ME).”

In addition to Java applets, the system was also expected to run even simpler widgets, which it defined as “little application that reside in the Home Application. They are meant to be simple, graphic representations or interesting ideas. Examples include: current weather, stock quotes, sports scores.” 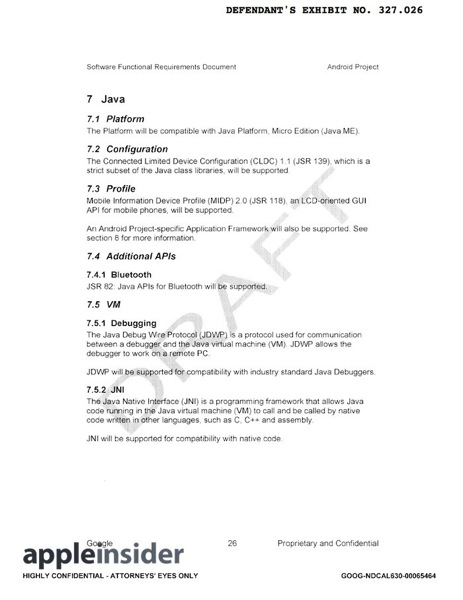 So you can imagine the reaction of the Android team to the iPhone when they realized that they were doing it wrong. That was the moment when an Android Team member said: “As a consumer, I was blown away – I wanted one immediately – but as a Google engineer, I thought, ‘We’re going to have to start over’.”