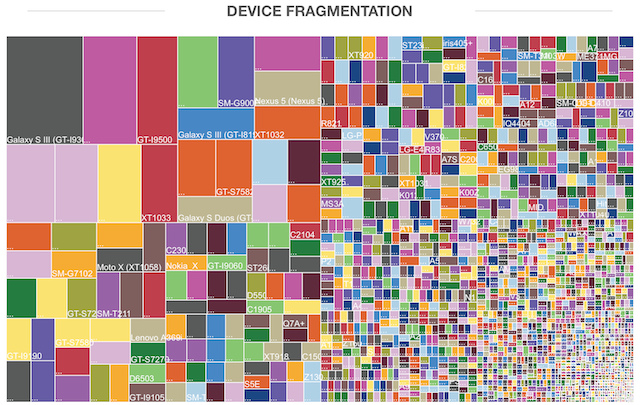 According to a new report from OpenSignal, a company that creates crowd-sourced mobile phone network coverage maps, over 18,796 distinct Android devices have been discovered, revealing that fragmentation on Google’s mobile platform has grown 60% from last year. The report also highlights that Android fragmentation has more than quadrupled since 2012.

“Fragmentation is both a strength and weakness of the Android ecosystem, a headache for developers that also provides the basis for Android’s global reach. Android devices come in all shapes and sizes, with vastly different performance levels and screen sizes.

What this means is that developing apps that work across the whole range of Android devices can be extremely challenging and time-consuming.”

The study has also revealed that there are many different versions of Android being used, which adds another layer of complexity. On the other hand, the report also confirms dominance in the Android realm from a brand perspective with 43% share, while Sony ranked second with just 4.8% which illustrates the gap between Samsung and the rest of Android smartphone makers.

To read the full report, head over to the source at this link.