Android may be the most popular mobile platform globally, but its “openness” comes with a price: its users are the target of malicious attacks. Two separate reports issued by mobile security firms practically emphasize the same thing: Android users, beware of what you install on your smartphone!

The first report signed by Lookout found that about 6.5% of free apps on Google Play contain adware. These are apps that display advertising outside the normal app experience, harvest unusual personal information, or perform actions in response to ad clicks, the report says (via AllThingsD).

Furthermore, adware is on the rise among users across the globe. More than a million U.S. Android users have downloaded adware, but European users seem the most affected: Lookout estimates the number of users downloading adware to be 600,000 users in France, 400,000 in Germany and 200,000 in the U.K. 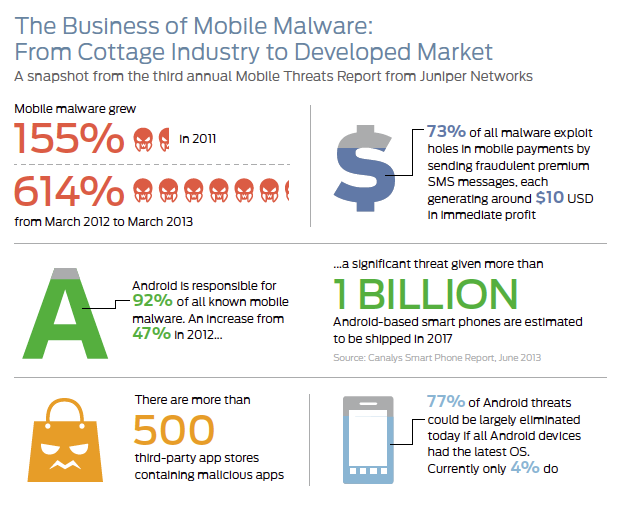 The second study was issued by Juniper and raises a red flag: while iOS – the second most popular mobile platform – has been noticeably absent from Juniper’s malware sample database, Android malware rose more than 600% compared to 2012.

Juniper says it detected a total of 276,259 mobile malware apps, up from 28,500 spotted in 2011 and only 11,000 in 2010. The majority of the mobile malware documented by Juniper was either FakeInstaller or SMS Trojan. This is certainly alarming. 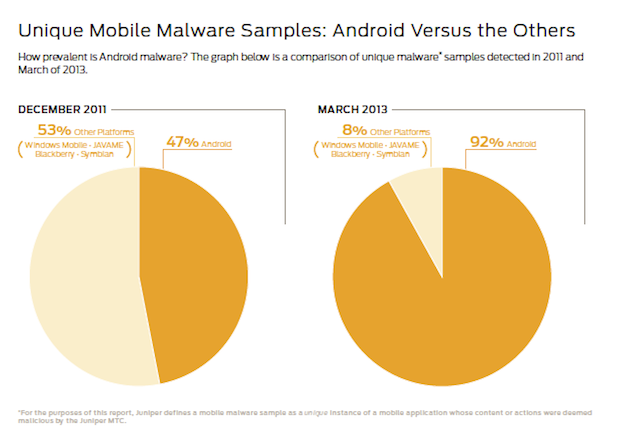 The mobile security firm’s report points to the Android fragmentation as one of the root causes of the rise in mobile malware. As of June only about 4% of Android users were running the most recent version of Google’s mobile OS, which contains security features that fend off 77% of the Android malware documented by Juniper.