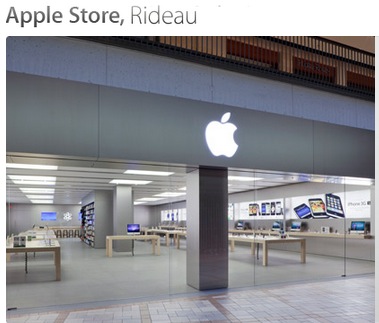 As spotted by Metro News, it appears Ottawa is getting its second Apple Store soon. Apple’s job posting on Workopolis.com notes it is hiring for its upcoming London Apple Store, but also mentions Ottawa:

Much more than just a place for amazing Apple products, the Apple Retail Store provides its customers with a place to learn, to grow their creative skills, receive technical tips, and well-informed product advice. Each Apple Retail Store has a vibrant role in its local community and business is booming nationwide.

We will be opening a new Apple Store in London and Ottawa, Ontario. We are currently accepting applications for all open positions.

Last month, job postings on Apple.ca confirmed the London Apple Store, which is set to open at Masonville Place, in a vacant retail spot previously occupied by Eddie Bauer. Many have speculated the store is set to have a grand opening at the end of June.

There’s no word on the location of this new Ottawa store. The existing Ottawa Apple Store is located at 50 Rideau Street.

Update 1: According to an anonymous tipster, this second location could be set to open at Bayshore Mall, where the old Gap Kids store used to be. Currently, the store front is covered in black paint, a usual sign an Apple store is underway.

[via Metro News; thanks Keith!]

The adoption and popularity of cloud gaming on mobile devices are continuously on the rise. With higher demand for pristine control over beloved games, the need for functional and intuitive controllers is also emerging. Turtle Beach is amongst the latest to bring a solution to the table with its Atom and Recon Cloud controllers. The...
Steve Vegvari
12 mins ago

The Federal Trade Commission (FTC) is said to be moving forward on filing an antitrust suit in order to block Microsoft's substantial acquisition of Activision Blizzard. News of this comes as Microsoft awaits approval from UK regulators. According to three people familiar with the matter, the FTC is “likely to file an antitrust lawsuit to...
Steve Vegvari
25 mins ago