The anti-Uber protests by taxi drivers continue in the City of Mississauga, as yesterday a meeting to discuss Uber’s future had to be postponed, reports CTV News:

Mayor Bonnie Crombie, city staff and the city’s Public Vehicle Pilot Program Committee were all on hand to discuss ride-sharing options but Coun. Ron Starr asked security to clear the council chambers, telling the crowded room that the meeting would be moved behind closed doors. 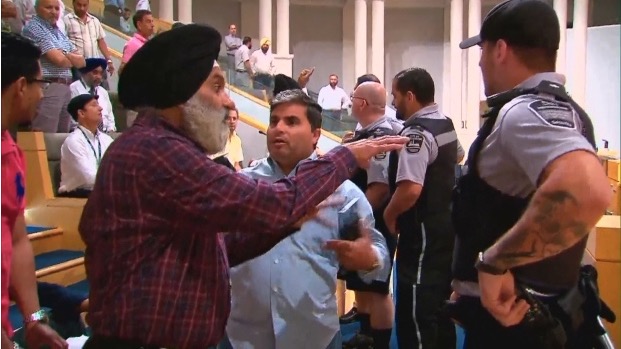 As Mayor Crombie left council chambers, protesters yelled “Shame, shame, shame,” in what sounded like an episode of Game of Thrones.

Coun. Ron Starr asked security to clear the chamber as the meeting had to be moved behind closed doors, as protesters refused to remain calm and were being unruly and yelling.

He said the thought the emotion in the room was “surprising”, saying “We adjourned the meeting because it got so loud and boisterous that we had to call security and the police,” further adding “The taxi industry feels that everyone should be following the same regulations that we have in the city right now but Uber is not agreeing with that and that’s what caused the disruption.”

The goal of the committee’s third meeting was to have recommendations ready for council for Wednesday, but that now appears to be delayed. Starr says September will most likely be the time the Uber issues reaches council now.

The issue at stake is capping the number of vehicles used by ride sharing services like Uber. Taxi companies want a cap on number of UberX vehicles, while the latter refuses to accept a cap on licensed cars to operate.

Starr said “One of the resolutions today was that the number of cars would be unlimited so that caused a lot of the consternation (in the chamber).”

Back on May 11, Mississauga banned UberX from operating in the city, but city council passed a motion to create a committee to bring back regulated ride-sharing, starting with a pilot program, where the Mayor suggested a cap of 50 drivers, equivalent to the number of taxi plates in operation.