Last week one of my colleagues, interested in getting his first iPhone, was asking if there was a radio app that would stream music. Being a subscriber to a satellite radio service provider he often enjoys CBC Radio 3. I mentioned that I knew of a CBC Radio app and would dig into it further.

While the CBC Radio app has CBC Radio 1, 2, and 3 to enjoy, I came across HiDef Radio that has way more stations than I would have ever expected from a free app. In fact they claim there are over 30,000 stations from around the world.

When the app first opens you are presented with an Index from which you can search for stations by Top Feeds, Genre, or by a specific name. You can also add your own feed. For $1.99 you can get HiDef Radio Pro, which also gives you the ability to: 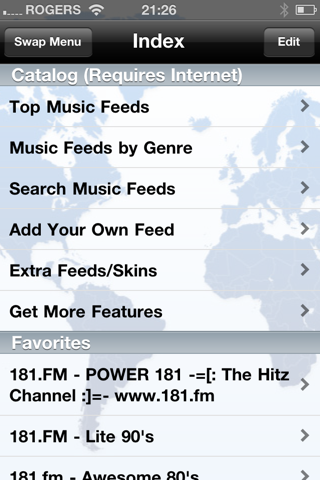 I recently went on a road trip down Highway 401 that took me along relatively flat terrain from Windsor to London, ON. I ran both CBC Radio and HiDef Radio Free for approx. 1 hour each with my iPhone 3G running iOS 4.1.

I have to say that both apps performed admirably. I only experienced a few moments where the sound cut out with HiDef Radio even though I still had a 3G signal. For us local folks, there is a Rogers 3G dead zone between French Line Rd. and Comber Side road. After passing the dead zone the app continued playing without any intervention.

The CBC Radio app used approx. 58 MB of 3G data while HiDef Radio used approx. 65 MB after an hour of play. If you wanted to listen to either app for 1 hour per day, in 1 month you would use almost 2 GB of data (so hurry and get a 6GB plan before theyâ€™re no longer offered!). Of course if youâ€™re on a Wi-Fi network you donâ€™t have to worry about 3G data usage. 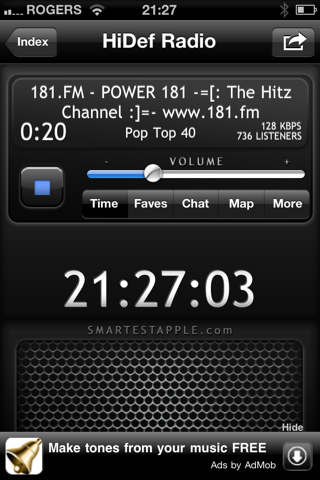 I use a cassette adapter to get audio from my iPhone to my car radio and one thing I found was that the HiDef Radio app tends to overdrive the audio out of the headphone jack. When switching between iPod and CBC Radio or other audio sources, there was no noticeable difference in audio volume at the given car radio volume setting. However when running the HiDef Radio app (at the same car radio volume setting) I thought Iâ€™d blown out my speakers because of the massive increase in volume. Then with the volume turned down I could hear some distortion playing along with the bass. Â I tried this using a number of iPod EQ settings and got the same result. 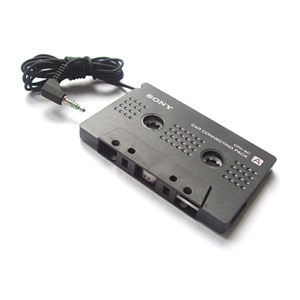 In summary, I would recommend both the CBC Radio and HiDef Radio apps (even though I experienced the volume issue). With XM and Sirius Radio offering apps in the iTunes Store, could this be the end of true â€œsatelliteâ€ radio where we get data streams from up above? Has anyone else experienced my volume issue with HiDef Radio? Which radio apps do you use?