The seemingly random acceptance of some, but not other Apps is a constant source head-scratching ponderings for lots of App Developers. It seems that there is no definitive reasoning behind why some Apps get approved, and others slip through the cracks.

Alkalai Media documented on their blog the recent submission (and subsequent re-submissions) of their app of funny slightly vulgar sound effects, called “CrudeBox”, to the App Store. It was rejected as Offensive Content. So they slightly retooled it, renaming it and some of the sound effects (like ‘vomit’ to ‘sicky’), and changing the background images. They did not change the actual content of the App though, and it passed! 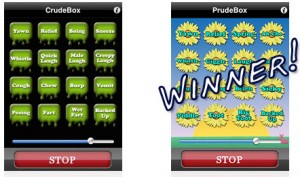 Not only does this shine a light on the slightly odd, and sometimes seemingly random approval process, it’s also done wonders for the App to get noticed by us bloggers – lucky them.

I don’t have the guts to check this out myself (besides, why would I need an App that has at least two different fart sounds?) but would love to know the opinions of anyone out there who’s tried out the newly named PrudeBox.