Apple has once again changed its iOS App Store search algorithm that changes where an app is returned when you search for a particular keyword like “notes” or “racing.” The tweak in the algorithm does not affect the app’s ranking in the App Store’s top charts.

The change, first spotted by MobileDevHQ an app marketing tools provider, affects both iPhone and iPad applications and occurred sometime between December 11 and 12. The average ranking change was 41.5 positions, 8 times the normal everyday change they see for iPhone results. Normally, the daily change is about 5 positions.

Apple also made significant changes to their search algorithm when they launched iOS 7 and these past changes appear to be larger. To give some perspective, the changes we saw with the launch of iOS 7 were also noticeably significant.

Below is a graph from MobileDevHQ showing the changes made to Apple’s App Store search algorithm for the iPhone. The first spike in the graph is the changes when iOS 7 launched. As you can see those were significant but slightly smaller than the most recent changes.

TechCrunch has provided a couple of charts comparing search results for a select few keywords. 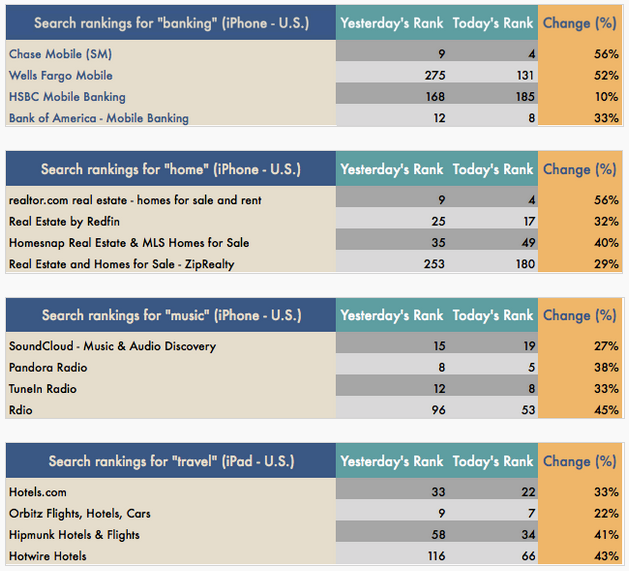 Apple will continue to make changes to their search algorithm to try and give you the best results every time. We have seen Apple focus on making search in the App Store better, for example, in November they started correcting typos and misspelling.

Apple analyst Ming-Chi Kuo has today claimed in a series of tweets that only the highest-end 'iPhone 16 series’ model will feature a periscope camera lens next year. Earlier this month, a report by The Elec noted that the new periscope camera lens expected to debut this year exclusively in the iPhone 15 Pro Max will...
Usman Qureshi
10 mins ago

Instagram co-founders Kevin Systrom and Mike Krieger are making a return with a brand new project called ‘Artifact,' a personalized news feed driven by artificial intelligence. As noted by the Platformer, the app uses machine learning to understand your interests and will soon let you discuss those articles with friends. The company plans to let users in...
Usman Qureshi
31 mins ago