If you spend the majority if your screen time on messaging and social media, relax, you’re not the only one: time spent in this category of apps grew an impressive 98% in Canada year-over-year, according to mobile analytics company Flurry, now part of Yahoo. When you look at the global picture, this number changes to 44%, the report reveals. 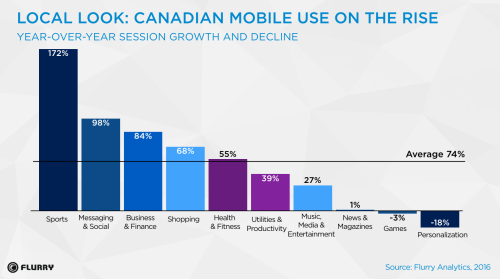 Overall use of apps grew by 74% in Canada, Yahoo’s Yannis Dosios, Vice President of Platform & Exchange said at the Toronto’s AdWeek on February 2. What the market research firm has noticed is that sports apps usage grew by 172% year-over-year among Canadians, and it has also identified a growing adoption of phablets.

Compared to the previous year, gaming, the most popular app category, saw a time-spent decline of 3% in Canada, which compares to the 4% observed worldwide. One possible reason is user habits, Yannis said, because that data compares to the strong increase in gaming revenue reported by Apple earlier this year. 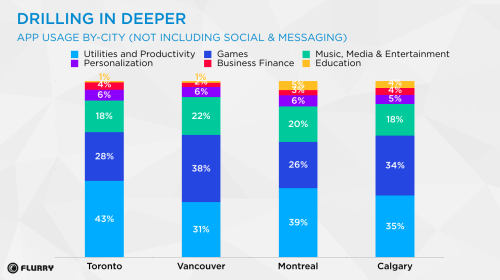 Another interesting trend noticed in Canada is that shopping apps are becoming more and more popular, growing 39% in the country compared to just 31% globally.

Phablets are also gaining traction, Yannis said. While devices with screens between 5 and 6.9 inches account for 41% worldwide, in Canada the market research firm has noticed that the number of phablet users increased by 26% during 2016.

The conclusions were drawn based on data provided by Flurry Analytics users: 4,200 companies, 14,500 apps installed across 38.6 million devices in Canada, measuring 7 billion sessions per day.