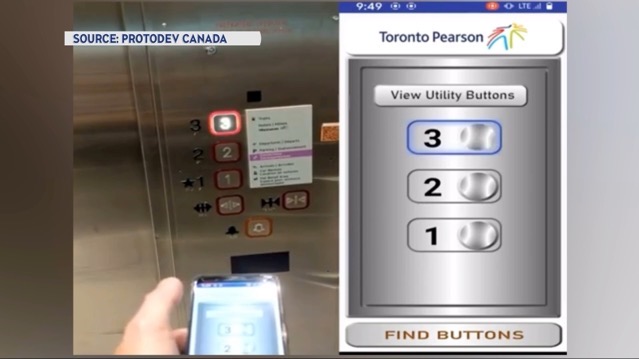 The app, which should prove quite useful during the COVID-19 pandemic, got its start a couple of years ago as a tool to help with accessibility. “I’m in a power wheelchair myself. So, when I go into shops and stuff like that, it’s a bit of a pain in the butt to open doors,” said Wang.

He saw the need to open doors remotely, but it was an elevator at Carleton University that needed a solution. His Contactless Access app not only solved that problem but is also helping people stay contact-free when operating elevators or doors during the pandemic.

Canada’s largest airport has already started using the tech in six elevators on a trial basis.

“What it is done in a pandemic environment, is given us another way to help create a more touch-less and frictionless airport,” says Robin Smith, spokesperson for Toronto’s Pearson Airport.

“Here at Toronto Pearson, we’ve made a commitment to try any advanced or innovative technological solution that could have a positive impact for the health and safety of our airport community.”

The technology has also been installed at select properties owned by the National Capital Commission in the ByWard market.