Apple’s AssistiveTouch Makes It Easier To Use A Smartphone

In a NYT blog post, David Pogue discusses a thoughtful feature that’s available on all iOS 5 devices: something called AssistiveTouch.

Turning on the feature in Settings->General->Accessibility, causes a white circle to appear on the screen that overlays apps and the homescreens. Tapping on it brings up a floating on-screen palette. Its buttons trigger Multi-Touch gestures using one finger or a stylus. It also supports the use of adaptive input devices, like headsets and switches. 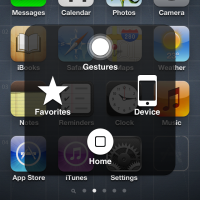 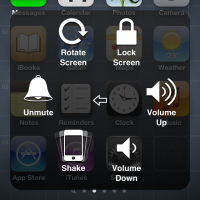 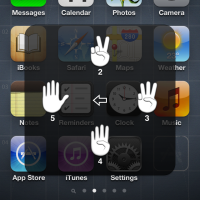 For instance, you can tap the on-screen Home button instead of pressing the physical Home button.

Tapping Device brings up a sub-palette of six functions, including Rotate Screen (tap this instead of turning the phone 90 degrees), Lock Screen, Volume Up and Volume Down, Shake, and Mute/Unmute. The last five of which replace the five physical buttons on the iPhone.

Tapping Gestures brings up a palette that depicts a hand holding up two, three, four, or five fingers. Tapping the three-finger icon, for instance, places three blue circles on the screen. Drag them and the phone thinks you’re dragging three fingers on its surface. Using this technique allows users to operate multiple fingers gestures with one finger (or stylus).

I doubt that people with severe motor control challenges represent a financially significant number of the iPhone’s millions of customers. But somebody at Apple took them seriously enough to write a complete, elegant and thoughtful feature that takes down most of the barriers to using an app phone.
I, for one, am impressed.

If anyone is using AssistiveTouch, please mention how well it’s working in the comments. And please feel free to share any suggestions for custom gestures.