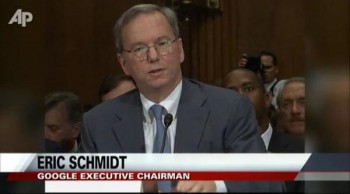 “Google has many strong competitors and we sometimes fail to anticipate the competitive threat posed by new methods of accessing information,” Schmidt writes.

Schmidt’s written comments come as a new reports finds that Siri drastically reduces the number of Google searches, many times to none.

The non-scientific report of 40 Siri users found that the feature greatly reduced the users’ dependence on Google search, with 27 users reporting that they haven’t used Google search once since they got the iPhone 4S and 13 reporting an average of two searches. These users would have previously averaged 10+ Google searches during the same period.

Much of Google’s income comes from the advertisements that appear alongside search results. If mobile phone users adopt voice rather than text for their searches ad revenue could be lost.