Last month, Apple announced it had sold 700 million iOS devices since 2007, which is surely a significant milestone. However, Asymco notes that the total number of active units is likely to be lower. “My estimate based on device replacement assumptions is that about 500 million are still in use”, says the author. This means Apple has already reached half-a-billion users mark. 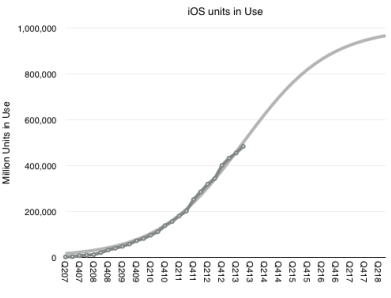 Asymco believes that at 500 million, iOS is at the half-way point in its growth. It could be that iOS might accelerate further in which case peak penetration could be higher than 1 billion, but might take longer to reach. The 500 million as 50% penetration point assumption fits the model as shown above.

“We already have “existence proof” that Apple can reach half-a-billion users. Apple does not need to discover a large new set of non-consumers. The idea of 1 billion iOS devices is simply the projection that each current user could some day use two devices.”

The assumption implies there will be nearly 1 billion iOS devices in use by the end of 2018.