The Cupertino tech giant saw its stock (AAPL) rise almost 1.6% in the first U.S. trading day after Christmas, solidifying 2019 as the company’s best performance year in a decade. According to Bloomberg, Apple’s shares have risen 82% this year after overcoming forecast cut and trade war concerns adding $530 billion in market value. 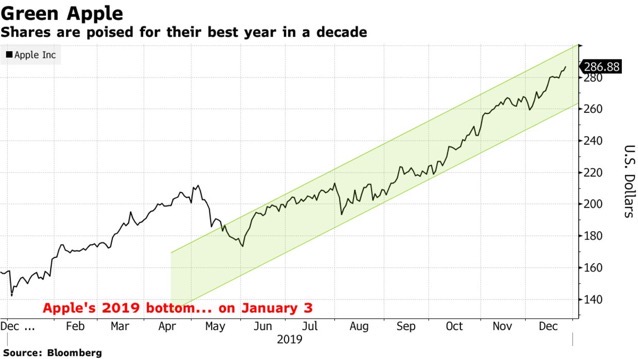 To put things into perspective, Apple stock has gained more than the market capitalizations of all but five companies in the S&P 500 Index and twice the market value of Intel Corp. in 2019.

Apple closed lower only five times in 18 trading sessions this month, with Thursday poised to be the third-straight daily gain for the iPhone maker’s stock. An upcoming test for Apple shares will, however, come in late January, when it is expected to report its first-quarter results:

The Cupertino, California-based company “started the year with a surprise negative pre-announcement that was followed by C1H19 bearish sentiment on the stock due to slowing iPhone units, lack of a clear 5G strategy, and U.S.-China trade tensions,” Cowen analyst Krish Sankar recalled in a Dec. 17 report. “That sentiment turned positive” in the second half of the year.

The operating system (OS) for Apple's long-rumoured mixed reality headset is now reported to be dubbed "xrOS." This naming convention comes following reports that Apple was naming its AR/VR headset OS "RealityOS." In a report from Bloomberg, Apple's new naming convention appears to have come out of nowhere. However, the report goes on to state...
Steve Vegvari
46 mins ago