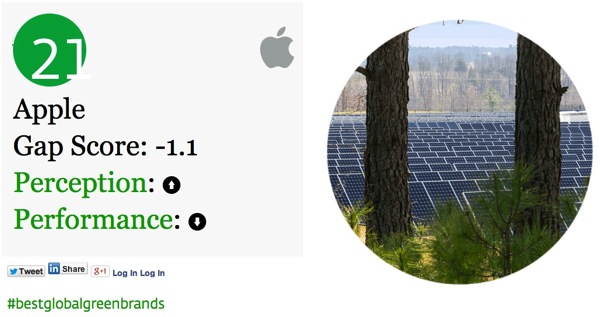 Interbrand has released their ‘Best Global Green Brands’ report for 2014 and Apple ranks in the 21st spot, out of the 50 brands listed. Here’s what the report says on Apple and its green initiatives:

Apple tends to work independently on its environmental efforts, but does work closely with supply chain partners to make improvements. The brand launched a pilot of its Clean Water Program with 13 supplier sites—that collectively use more than 41 million cubic meters of water per year—with a goal to reuse a significant amount of treated process wastewater and to recycle water within the production process. The brand also completed more than 520 site profile surveys to help determine environmental risks, and conducted 62 focused environmental assessments.

The top four green brand spots are automakers (Ford is number 1), while Dell, Samsung, Intel and HP rank higher than Apple in the Technology category. 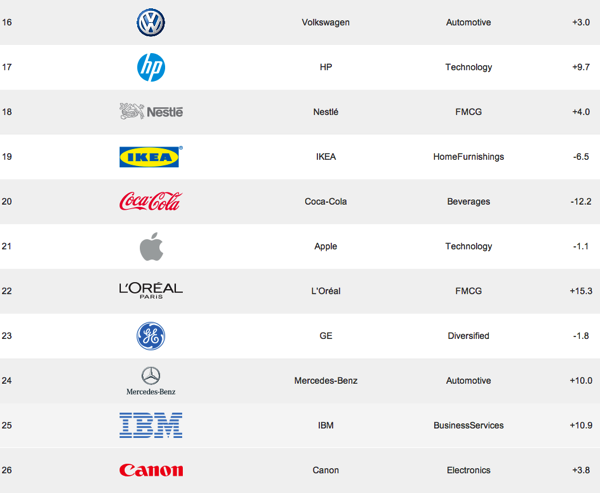 The methodology used by Interbrand says it’s “based on assessing both market perception and actual environmental performance.”

The Gap Score is calculated subtracting the perception score from the performance score—in this case, Apple’s score was a -1.1.

The performance side of things is from Deloitte and their analysis of each brand based on 83 individual sub-metrics across six pillars, while the perception side is from a survey conducted in the 10 largest global economies based on GDP, interviewing over 10,000 consumers.

Interbrand’s ‘Best Global Brand’ report for 2013 had Apple has the world’s top global brand, but it appears the company’s green efforts aren’t valued highly enough in how these rankings are calculated.

Earlier this year, Greenpeace’s renewable energy index report showed Apple had a ‘Clean Energy Index’ of 100 percent, compared to other tech companies, helped in part by the company’s commitment to using renewable energy for its data centres.

Apple CEO Tim Cook previously said the company “has a lot to learn” when it comes to the environment, but also mentioned “we will work to leave the world better than we found it,” as narrated in the following video released on its new Environment website, which debuted in April: