The Institute of Communication Agencies (ICA) and Ipsos Reid have released the results of their Most Influential Brands Study for Canada for 2012 at the ICA’s fifth annual FFWD Advertising and Marketing Week. The top brand this year was Google, followed by Microsoft, then Apple in third spot. 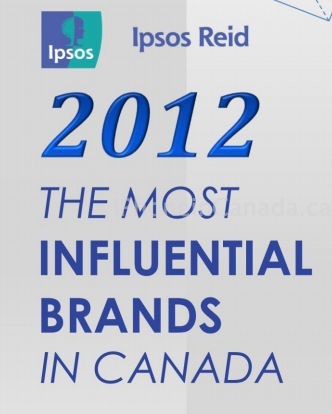 Below is a list of the top 10 brands (with their changes in brackets):

As for our major wireless carriers, Bell was in the 20th spot, Rogers at 49th and TELUS at 51st. Notable mentions include BlackBerry at the 22nd spot, Samsung at 18th (a huge jump up 29 spots) and Twitter at 47th.

“Brands have meaning, personality, and attitude. And because people so often identify with, relate to, and define themselves by them, brands have influence,” said Steve Levy, president, Ipsos Reid East. “For a brand to succeed, it has to reach its audience, connect with them, and get them to buy into the brand’s promise. But for a brand to have real influence it needs to win on the crucial dimensions we identified — trustworthiness, engagement, leading edge, presence, and corporate citizenship. Google is this year’s leading example — not only in Canada but on the world stage.”

The study was conducted during the last week of October to November 6th and consisted of 5,014 Canadian residents using the Ipsos iSay Panel. Below is an image of the entire top 100 list:

Just over a year ago, another Ipsos Reid survey conducted in Canada called Apple the “leading edge” brand, a major factor in overall brand influence.