According to Stephen Shay, a tax and business law professor at Harvard Law School, a “potential loophole” in the GOP tax bill could let Apple save more than $4 billion off a future tax bill, Bloomberg is reporting. Microsoft, Cisco and all other companies which began their fiscal years before Jan. 1, will also be able to get one last break before paying up. 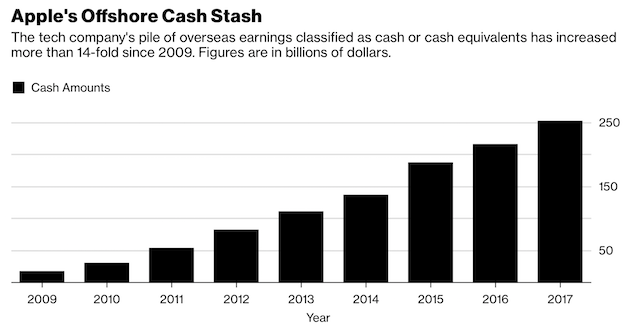 Shay, who was a senior Treasury Department official during the administrations of former presidents Barack Obama and Ronald Reagan, calls the loophole a “side effect” of the speed with which congressional Republicans passed their tax bill. “This bill was passed on a speed train schedule with no time to think”, he said, while explaining thats its up to Treasury and the Internal Revenue Service to create rules to prevent companies from taking such advantages.

The timing issue that Shay surfaced stems from a provision that, in effect, gives a company until the end of its fiscal year to measure what’s cash and what isn’t for tax purposes. Consequently, companies that began new fiscal years before Jan. 1 get an extra chance to reduce foreign cash they’ll accumulate this year — which they can do by distributing cash dividends to their U.S. parents before tallying up what’s left to be taxed, Shay wrote.

Under separate changes that took effect Jan. 1, any such dividends would be tax-free in the U.S., he noted.

It is believed that if companies use the strategy to try to reduce their tax bills, it would be up to the IRS to challenge the move and then see whether its position holds up in court.