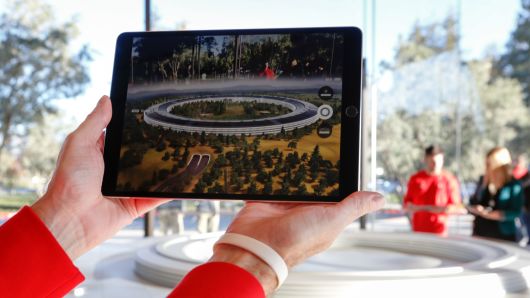 In his recent note to investors, Wamsi Mohan, senior equity research analyst at Bank of America Merrill Lynch, has said that Augmented Reality (AR) could prove to be “yet another competitive advantage” for Apple, and could boost iPhone and App Store sales, generating as much as $8 billion in revenue for the company (via CNBC News).

“We reiterate our Buy on strong capital returns, continued strong growth in Services revenues and AR providing yet another competitive advantage.” The bank increased its price target from $225 to $230, about $40 above where the stock was trading Tuesday. Shares of Apple are up more than 30 percent year over year and 12 percent so far this year.

The analyst explains that the “revenue opportunity” is for $6 billion to $8 billion in additional revenue from now until 2020 with $1 billion of that coming from AR apps and the rest coming from increased iPhone sales. He also said that If Apple introduces AR-specific eyewear, the revenue upside could be as much as $11 billion.

Mohan also highlighted that it’s not just video game makers capitalizing on AR. Retailers like Lowes and Home Depot are also using it to help customers picture how countertops, floors, blinds or paint might look in their homes before buying them.

With over 1 billion Apple devices already equipped for Augmented Reality apps, Mohan said iOS is “a logical and extremely attractive” option for those developers.