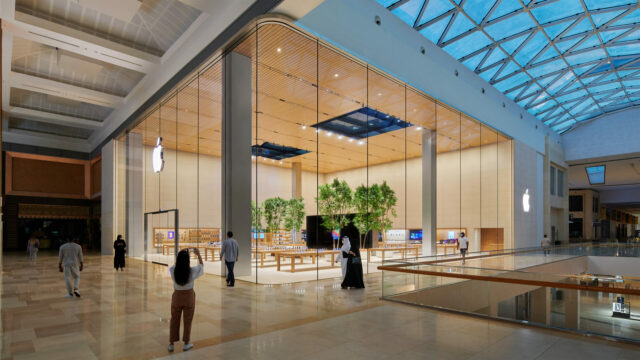 A new press release from the Cupertino company explains that with nearly double the size of the original location opened in 2015, the new store has plenty more space for checking out all of Apple’s wares and taking part in Today at Apple sessions.

“With the opening of the newly expanded Apple Yas Mall, our team is ready to welcome even more of Abu Dhabi’s incredibly diverse and innovative community to this beautiful new space,” said Deirdre O’Brien, Apple’s senior vice president of Retail + People. “We look forward to continuing to bring the best of Apple to the UAE, and building on our history in the region.”

Situated in a prime corner location at the mall’s town square, the store features a stunning curved glass exterior and integrates over 150 feet of glass throughout the storefront. Bianco Cristal floors and wood ceilings are used throughout the space, resembling similar materials found in other Apple Store locations around the world.

Customers can discover Apple’s products and services at surrounding tables and avenues, learn more about Apple’s various program across iPhone, iPad, Mac, and Apple Watch, and get shopping support from Apple Specialists.

Apple has been operating in the region for over 10 years, and has more than 600 team members across the UAE.