Apple Reflects on 30th Anniversary of Americans with Disabilities Act

Apple shared a post today in which it reflects on the 30th anniversary of the Americans with Disabilities Act (ADA) and the company’s accessibility features. 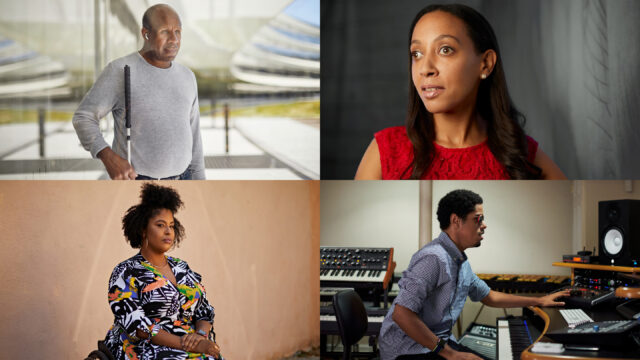 The Newsroom post honors the 30th anniversary of the Americans with Disabilities Act (ADA) alongside artists, activists, and more, and those involved discuss the ADA, how it has changed over the years, and how technology has a place in society.

Stories include that of Matthew Whitaker, a jazz musician who creates music using VoiceOver:

When I’m ready to record my music, I use Logic Pro X on my MacBook Pro. I usually record the drums first, then I add bass, then add whatever else I need. With VoiceOver enabled, I’m able to navigate really well around the software. Once the piece is completed, I can share the audio. I then create braille music using Lime Aloud software by Dancing Dots. This software not only produces braille music, but I can also print in sheet music for my band members.

Whitaker points out that while technology can’t solve every problem blind people face, it does help out daily:

Technology does not solve every obstacle one can encounter as a blind person, but having access to the equipment and applications I need in daily living, music creation, and being a student is the right of every American with a disability.

Disability rights lawyer, speaker, and author Haben Girma also speaks about a case that has helped prevent companies from making it more difficult for people to access things like ebooks and documents:

I represented the National Federation of the Blind in a lawsuit against a company that designed a library where blind readers were blocked from reading many of the ebooks and documents. The case established legal precedent as the first court decision in the Second Circuit, and the second in the country, holding the ADA’s promise of equality extends to virtual places. Since then we’ve had multiple cases upholding the ADA’s presence online.

Tatiana Lee shares her story about being an actress in Hollywood, a business owner, and a Hollywood inclusion activist all the while having multiple disabilities and how a home filled with Apple’s products makes life that much easier, even giving a shoutout to the HomePod:

I am a businesswoman. I run my own Black, disabled-owned business, and it gets complicated trying to navigate it all. Being a person with spina bifida, which is a neural tube defect, I am paralyzed from the waist down, so I use my hands to do everything. They push my chair, do everyday tasks like dressing myself, and do all my typing. But, from being able to copy and paste on my phone to my laptop, to putting reminders on my HomePod, to using Voice to Text, to saying ‘Hey Siri, schedule this meeting’ and using Siri Shortcuts to get things done quicker with my voice, just having the entire Apple ecosystem in my home saves me so much time, thought process, and energy with my hands.
Technology makes my life a lot easier as a person who has multiple disabilities, who is building a full-time empire. I want my community of Black disabled women to feel seen. In the past 10 years, I’ve accomplished a lot in my modeling and acting career despite the barriers. In 2018, I was honored for my contribution to inclusion in Hollywood entertainment as the first woman of color to receive the Christopher Reeves Actor Scholarship. Hollywood is moving in the right direction with so many fantastic film and TV projects with authentic disability portrayal. I’m humbled at the opportunity to play a role in moving the needle forward.

The press release is filled with personal stories, and it’s absolutely worth a read, especially in light of the 30th anniversary of the ADA in the United States.

As Canadian Tire turns 100, it is entering the world of virtual reality (VR) with a Virtual Tree Decorator and a limited-edition 100th-anniversary NFT. The Virtual Tree Decorator is a virtual reality experience that lets you experiment with Christmas tree decor online and bring your dream tree to life. You can design your magical Christmas...
Usman Qureshi
31 mins ago

Google has today announced another Pixel Feature Drop with updates across the Pixel smartphone lineup and the Pixel Watch. The updates are rolling out now on Pixel 4a through the latest Pixel 7 and Pixel 7 Pro. Here are all the new features coming to Pixel devices. New features for Pixel Phones VPN by Google One: Pixel 7...
Usman Qureshi
57 mins ago