Earlier today, or sometime within the last 48 hours, Apple has added a convenient “Preview All” button to song albums on the iTunes Music store (not on iPhone iTunes Store app).

Up until today, the iTunes Music store has allowed users to preview 30-second clips of songs, which allows users to briefly preview their purchases. While the 30-second preview is great, for entire albums it becomes a burden as users are now going through each of the usually 10+ songs tapping preview. 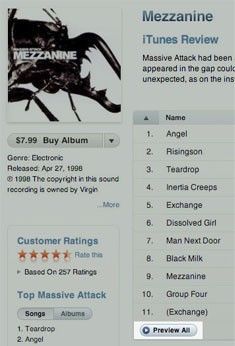 With the new “Preview All” button for iTunes albums, users need only press it once to preview the entire album of music at 30 seconds a preview per song. Check it out!