Apple Rises to the Top Again as World’s Favourite Brand 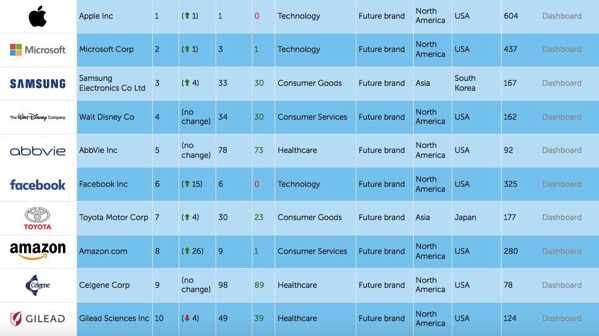 Apple has once again topped FutureBrand’s analysis of the top 100 listed companies to become the most admired brand in the world, CNET is reporting. Last year, the Cupertino company slid into second place behind Google but this year, it has regained the top spot. For those who aren’t aware, FutureBrand analyses the world’s 100 biggest companies by market capitalisation each year, asks 3,000 consumers and industry professionals in 17 countries about them and produces a ranking of what it calls “perception strength”.

The two greatest feelings engendered by Apple this year were passion and admiration.

Those of drier countenance and Android phones will realize quickly that Google is no longer one of the 100 largest companies by market capitalization. It’s now part of Alphabet, so Apple didn’t have to contend with last year’s winner. It did, though, have to compete with Alphabet, whose self-driving car must have suffered a software malfunction — as it only propelled the company to 21st place.

Microsoft, which also scored highly on passion and admiration, ranked at number 2, and is being seen as a company with an excellent near-term future. Third was Samsung, rising from number seven last year. While the South Korean firm incited far more feelings of indifference, it scored very highly on the idea that it had a brilliant future, especially when it comes to innovation.

Facebook and Amazon were the other two tech companies appearing in the top 10.