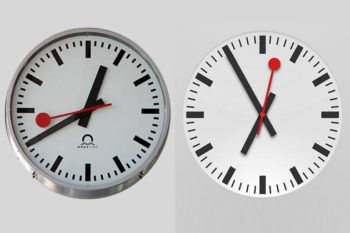 Apple has agreed to license the Swiss Federal Railways clock that many noted was copied in iOS 6 on the iPad via the clock app. The Verge points us to the railway website which notes the agreement in place, but no terms were disclosed.

The Swiss Federal Railways SBB and Apple have reached an agreement on the use of the SBB station clock on devices like iPad and iPhone. That the two parties have governed in a license agreement.

For the use of the SBB station clock on devices like iPad and iPhone, the Swiss Federal Railways SBB and Apple have agreed and signed a license agreement. The parties have agreed to give the amount of the license fee as well as other details about the Convention any further information.

The iconic railway station clock was built in 1944 for SBB by engineer and designer Hans Hilfiker. Many were surprised to see it appear in the clock app within iOS 6, especially SBB which lodged an immediate complaint about its use. Good for you, Apple.

Apple has just published a new feature on how Chicago Lighthouse's 'Photography for All' program is using Apple technology to teach photography to teens who are legally blind or have low vision. Photography for All is part of the city’s One Summer Chicago youth employment initiative, which provides people ages 14 to 24 with internships...
Usman Qureshi
43 mins ago

According to an article published by The Wall Street Journal, Apple Pay adoption has now hit 75% of iPhones in the U.S., a number that has climbed up from only 10% in 2016 and 20% in 2017. Apple says that 90% of retailers across the U.S. now take Apple Pay, whereas only 3% of retailers accepted...
Usman Qureshi
58 mins ago