Apple, Amazon Race to Reach a Market Value of $1 Trillion 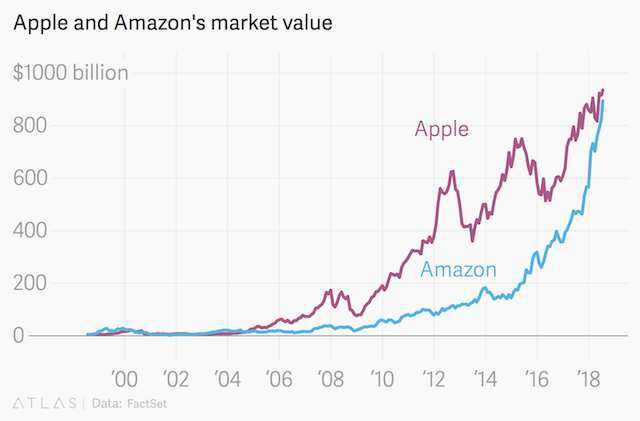 With Amazon’s market value briefly surpassing $900 billion yesterday following the announcement that it sold over 100 million products during the latest Prime Day, the online retail giant is now in a direct race with Apple to become the first-ever $1 trillion company in the world (via Quartz).

Amazon’s shares hit $1,858.88 yesterday, giving the company a stock market value of $902 billion. On the other hand, Apple is currently valued at $940 billion. During the year, Apple’s shares have increased by 13%, while Amazon’s are up a massive 58%.

For Amazon, analysts’ average price target is $1,903 (according to FactSet), which would give it a market value of $923 billion. To reach $1 trillion, its share price would need to hit $2,061. Just four out of 33 Amazon analysts have published a target price above that.

Meanwhile, the average price target for Apple is $198 which would give Apple a market value of $973 billion. To reach $1 trillion, it needs a share price of $203.45, with 10 out of 22 analysts setting price targets above this.

Which company do you think will reach a market value of $1 trillion first?