From the moment Steve Jobs introduced the iPad in 2010, tablets have been gaining popularity around the world and for some they are becoming a PC replacement.

Search-targeted advertising company Chitika released an article today which summarizes the state of the tablet in the third quarter of 2014. 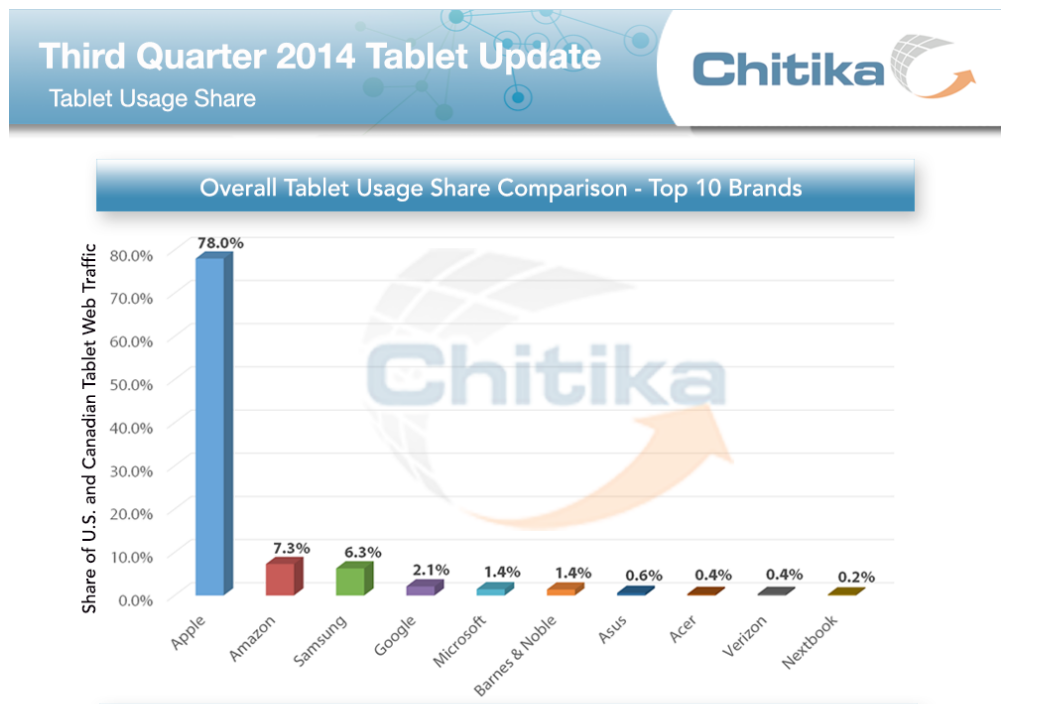 The company found that the majority of North American web traffic from tablets in Q3 came from Apple’s iPad and Amazon’s Kindle Fire. Web traffic on Apple and Amazon devices saw an increase of 0.8 percent and 1.2 percent respectively. Samsung drops to third place after falling two percent quarter over quarter.

“Despite these changes at the top, the overall tablet usage environment remains very similar to what was observed earlier in the year. Aggregate Web usage from Apple’s iPad users remains substantially higher than that of any other competitor, with Amazon and Samsung representing a second-tier above the remaining manufacturers.” 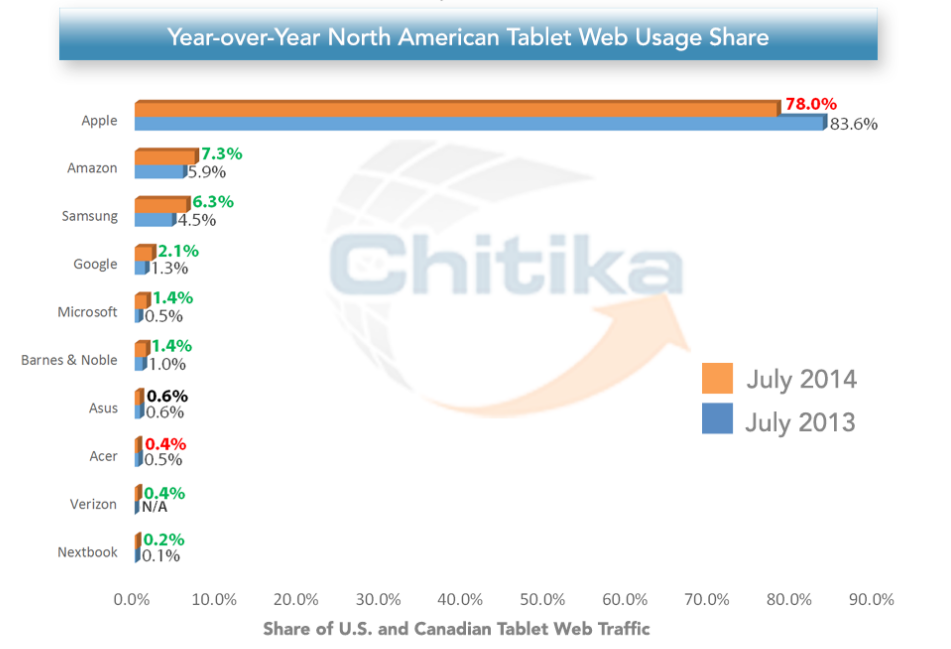 Currently, the most critical market for tablets around the world is education, allowing students to carry all their textbooks on one thin and light device and interact with teachers and classmates more easily.

The Cuptertino-based tech giant has been taking education very seriously. Apple released iTunes U version 2.0 for the iPad a couple weeks ago which introduced new features like cross-course collaboration, which makes it easier for students to interact with their peers and their teacher. The latest version also adds the ability for teachers to create their own courses that meets their needs.

Apple is expected to announce the next-generation iPad and iPad mini this fall. The iPad lineup is rumoured to gain Touch ID, a fingerprint reader which first debuted in the iPhone 5S.

Amazon announced an all-new Alexa experience built just for kids today, with the launch of Echo Dot Kids. Echo Dot Kids come with Owl or Dragon designs and a 2-year worry-free guarantee. If your speaker breaks, Amazon will replace it. Also included are parental controls (time limits; explicit lyric filtering) and one year of Amazon […]
Gary Ng
1 min ago

[caption id="attachment_382288" align="aligncenter" width="1920"] Image: @OnLeaks and @Smartprix[/caption] Samsung's upcoming flagship smartphone, the Galaxy S23 Ultra, has just leaked in high-resolution renders that reveal its design and more. The leaked renders come from Smartprix and known tipster @OnLeaks. Samsung is months away from actually unveiling the Galaxy S23 series, which is being developed under the...
Nehal Malik
14 mins ago

Amazon is holding a virtual event right now, announcing new devices this year ahead of the holiday season. The first announcement was the new Kindle Scribe, which is the company’s largest e-reader that now includes writing capabilities. Kindle Scribe has a 10.2-inch 300-ppi HD display that’s also front-lit, and the included pen “never needs charging.” […]
Gary Ng
52 mins ago