One of the most talked about rumours leading up to the release of the iPhone 6 centred around the use of sapphire glass, which, as you already know, didn’t materialize as both handsets are still using the good old Gorilla Glass. But that’s about to change, says PTT Research analyst and GT Advanced investor Matt Margolis. This time, his claims are backed by an Apple patent, granted on September 18.

Since Apple has made a significant investment in GT Advanced, the two are working closely together to improve the material and drive down manufacturing costs. As we previously reported, another analyst, KGI Securities’ Ming-Chi Kuo, said that Apple skipped the sapphire glass because of its poor performance during drop tests.

Actually, there is much more. As it turns out, the material isn’t yet ready for mass production due to multiple reasons, and DisplayMate’s Raymond Soneira lists one of them — besides costs and manufacturing complexity, sapphire has almost double the screen reflectance of glass.

The likelihood of sapphire appearing on the iPhone 6 was close to zero because it will probably take at least another year for everything to come together. It is important to note that sapphire has some downsides over and above its much higher cost and manufacturing complexity. The most important issue for display performance is that sapphire has almost double the screen Reflectance of glass (due to principles of optics), so it will be harder to read sapphire screens in high ambient light. That might be one reason why the recently announced Apple Watch Sport edition has a cover glass rather than sapphire like the other models – because it is much more likely to be used unshielded in high ambient light outdoors. Another reason is that while sapphire is very hard it is also brittle and is likely more prone to impact breakage, which is more common in sports situations. So, if given the choice, I personally would choose a cover glass with its better screen visibility and breakage protection. Others may find the scratch protection more important.

Based on the new Apple patent, however, Matt Margolis is firm that Apple is working with GTA to produce an unscratchable and potentially unbreakable sapphire substrate. The fact is, the patent focuses on strengthening the sapphire, which may be weakened by multiple factors.

Apple and GT are continuing to work closely together on new ways to improve sapphire’s strength and reduce the likelihood the material cracks when dropped. Apple’s latest sapphire patent not only will improve sapphire’s fundamental naturally occurring flaw of cracking, but also will pave the way to reducing finishing costs and producing a truly flawless piece of sapphire material. Another knock on sapphire for cover screens has been the sapphire’s reflective properties; however Apple and GT have found a way to add an anti-reflectiveness coating on top of a sapphire substrate.

Those who have been keeping an eye on GTA and its plans for the future may have already noticed: The company is aiming to enter the consumer electronics market and is targeting a wide range of hardware such as mobile phones, computers, etc. 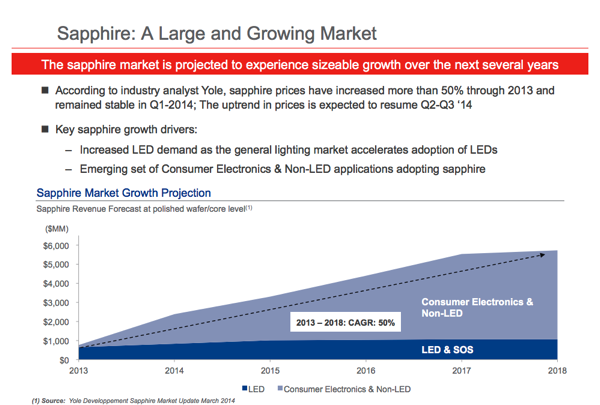 Matt Margolis believes it is a question of when, not if, Apple will use sapphire glass for the iPhone. However, there are lots of challenges this material still needs to overcome, and let’s not forget that the Mesa facility won’t start working at full capacity until early 2015.