Apple and Samsung Own Nearly 50 Percent of Smartphone Marketshare [Infographic]

On Tuesday afternoon (2pm PT) Apple is set to announce its 2012 Q2 earnings and rival Samsung is set to do the same this Friday. Both companies are expected to report record jumps in net earnings, notes the WSJ:

The two companies were the only major smartphone makers to gain share in the fourth quarter. Apple’s market share reached 23.5%, up from 16% at the end of 2010. Samsung held 22.8% of the market in the same quarter, up from 9.4%.

In addition, Apple and Samsung combined to grab 91% of the operating profits of all cellphone makers in the fourth quarter, up from 61% last year, according to Strategy Analytics, a London-based market research firm.

Combined, the smartphone marketshare between Apple and Samsung are almost 50 percent (46.3%, based on IDC data). Below is an infographic created by the WSJ that summarizes the contrast in strategies used by each company. Apple with one smartphone model, the iPhone, and Samsung with numerous Android smartphones (some the size of your face): 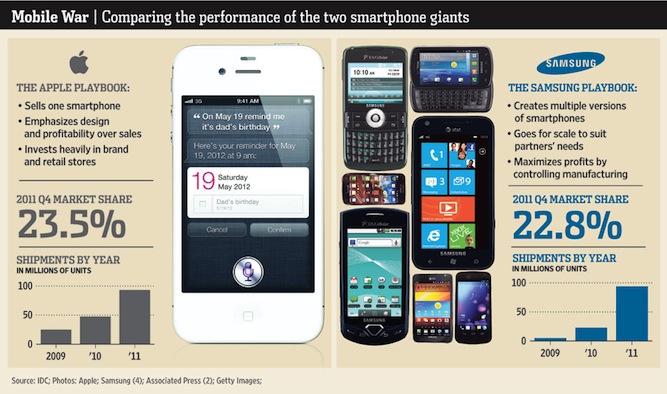 Former smartphone titans such as RIM, Nokia and Motorola now take a backseat to Apple and Samsung. It was reported earlier Apple finally outsold BlackBerrys in Canada, plus future smartphone users now plan to buy Apple and Android phones instead of those from RIM.