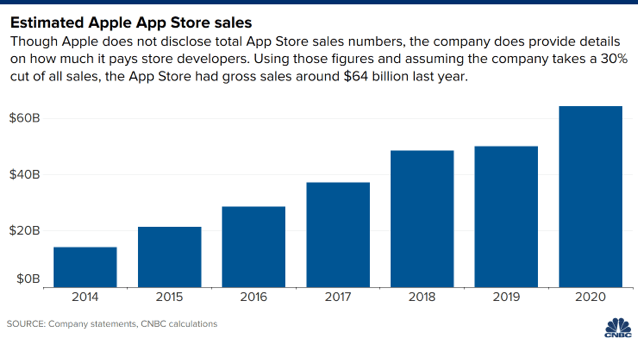 Apple charges 30% on average for digital sales through its platform, a common argument for Apple critics who believe the company has too much power. Apple has, however, recently started taking a 15% cut from companies that generate less than $1 million in the App Store.

It’s possible to back out roughly how much revenue the App Store generated based on how much Apple paid to developers in any given year. According to a press release on Wednesday, Apple has paid developers $200 billion since 2008, up $45 billion from the figure that was announced in January 2020. If that’s equal to 70% of App Store sales, then the App Store grossed around $64 billion last year.

A recent estimate by Sensor Tower found that top 1% of app publishers generate nearly 93% of the revenue across the App Store.

Sony and PlayStation are kicking off 2023 with a brand-new marketing initiative. Thanking fans for their patience worldwide as the company faced supply chain hurdles, PlayStation is launching its "Live from PS5" spot and announcing an increase in console supply. In a PlayStation Blog post, Isabelle Tomatis, VP of brand, hardware, and peripherals at Sony...
Steve Vegvari
48 mins ago