The U.S. Patent and Trademark Office has awarded a new patent to Apple which according to AppleInsider, analyzes on-board, broadcast or streamed media content to create a custom tailored playlist for an optimal user experience. The patent covers radio broadcasts, television broadcasts, Internet audio and video streams, satellite radio and more. 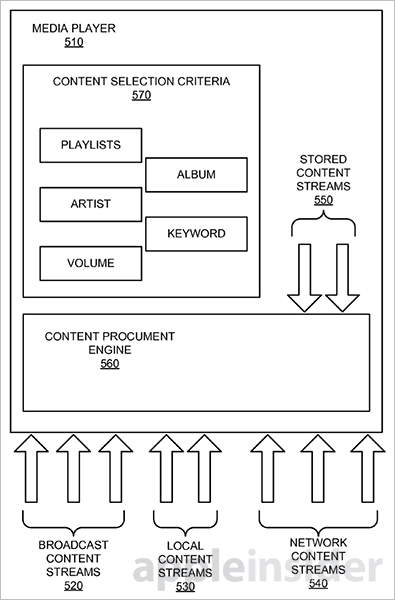 The patent titled “Auto-station tuning” allows automatic switching between a variety of media sources based on user preferences. Apple describes it as a system that can analyze data from multiple media streams to determine what is currently playing and more importantly, what will be played next. Using this information, a device can then intelligently switch stations or media streams, based on parameters defined by the user.

“For example, a user may tell the device to tune to a different FM radio station when an advertisement is detected. In other embodiments, a given configuration may change the stream from FM output to on-board content if user specifications are not met.

The process begins with the content procurement engine, which gathers audio or visual media based on predefined selection criteria. Examples include artist, genre, volume level and keyword, among others. According to user preferences for a particular station, the procurement engine may analyze and select content for playback by switching sources.”

While it is unclear if Apple will introduce a feature based on its latest patent in the near future, the invention however would be a pretty good fit for iTunes Radio and purchased iTunes content.