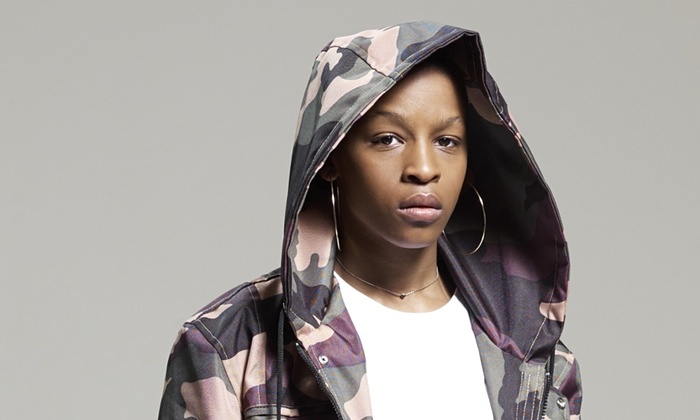 27-year old Julie Adenuga, who joined the U.S. based Zane Lowe and DJ Ebro on Apple Beats 1 radio from London, was relatively unknown before joining Apple and her only previous gig was on a community-licensed station Rinse FM. In a recent interview with The Guardian, she has revealed that she used to work at the Apple Store on Regent Street, working in sales and in the stock room. Today, she’s lining up alongside Dr Dre and Drake as one of the key voices of Apple’s new global radio station.

When we meet at a cafe across the road from the Beats 1 studio before a Triple Threat show she is vibrating with a kind of kinetic charisma. As is her habit, she wears a plain T-shirt, head completely shaved.

She sits down and I’ve already ordered a green juice which has arrived with a little biscuit. “Oh, you have to eat that as well, it’s really nice. I had it yesterday – dip it,” she says. I follow orders and it is surprisingly tasty but now my mouth is full of soggy shortbread and I can’t speak.

“Oh sorffffy,” I say, finger digging round my gums.

“Working at Apple before has made everything easier because I always remember people telling me like, ‘The new iPhone’s out but it hasn’t got a camera!’ and I’m like, ‘Chill bro! We just brought it out!’, she added.

Talking about her show on Beats 1, she said:

“People seem to like the show, so that’s good. I guess a lot of people just didn’t know what was happening here, they didn’t understand the roots of the music. Every time I play [UK genres] drum’n’bass or jungle, I’ll get a lot of people who are just hearing the genres for the first time, and who are like mesmerised by it. So that’s a great feeling.”

To read the complete interview, visit the source.