The class-action iPod DRM lawsuit against Apple will continue, as U.S. District Judge Yvonne Gonzalez Rogers announced in court today the case will continue because she has “an affirmative obligation and a duty” to protect the 8 million iPod customers part of the lawsuit, reports the Wall Street Journal:

U.S. District Judge Yvonne Gonzalez Rogers said she would hold a hearing Tuesday—out of earshot of the jury—on the qualifications of the new representatives. Lead plaintiffs’ counsel Bonny Sweeney told the judge she had more iPod customers “ready and willing” to step into the case.

The decision comes despite Apple presenting evidence last week that resulted in one plaintiff being dropped and the remaining questioned, as receipts dug up by the iPod maker concluded the devices in question were purchased outside the class-action window.

Today in court, Stanford University economist Roger Noll, told the jury Apple’s alleged monopolistic actions resulted in iPod buyers paying an average of $12 more and up to $31 more, from 2007 to 2009. 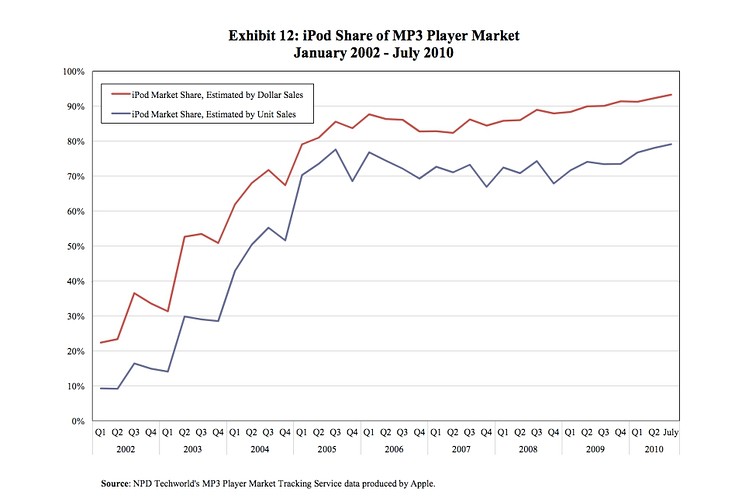 iPods dominated the portable music player market in the late 2000s, economist Roger Noll showed with this chart on Monday in court. ROGER NOLL; via WSJ

Apple attorney fired back at Noll, saying “You’re a wonderful economist, but you’ve got no technical background in this area.” Ouch. The trial continues this week, where Apple attorneys are set to present their arguments in the case.