In an interesting article at Asymco, Horace Dediu has explained how ‘customer creation’ is the most important metric in determining how well a company is performing. He refers to the greatest companies today, such as Facebook, Microsoft and Google, all of which are members of the “billion user club” or companies that crossed a billion active users, but he then questions, “do they really have a billion customers?” 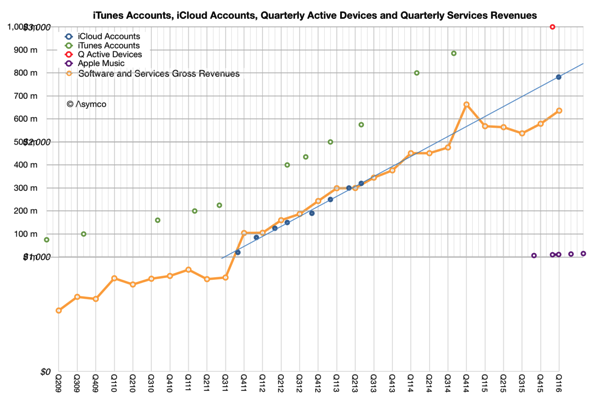 Starting with Microsoft, the company claims to have over 1.2 billion users but most of those users are using computers that their employers provide on which Microsoft software was installed. While the company may have millions of customers in the form of “accounts”, a billion people have certainly not chosen to buy a Microsoft product directly.

Similarly, Facebook although has over a billion daily users, they are not paying anything for the service. The company’s paying customers / advertisers, are only in the tens or hundreds of thousands. Same with Google. We don’t know how many accounts Google send invoices to but the number is very likely not even in the 100 million range. 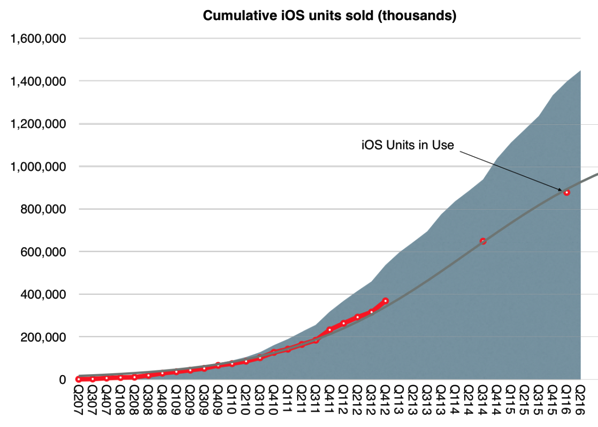 Which brings us to Apple. Apple does not offer a figure on its specific user count, but we have some viable proxies:

These figures are also parts of patterns (shown above) which offer and indication of predictable growth.

The company publishes specific figures on service revenues for consumer attached devices showing a run rate of $41 billion/yr in services for their device base. In combination, a picture emerges which shows that nearly Apple has nearly a billion customers. I can’t say how many with any precision but it’s certainly above 500 million (on the basis of iCloud and iTunes accounts). It’s below one billion because it’s certainly not the case that the attach rate of devices to users is as low as 1.

Apple customers are a recurring revenue. In fact, it’s fairly easy to calculate that being an Apple customer is equivalent to spending about $1/day on its products and services, indefinitely.

Even though it has not happened yet, the trend is pretty clear. Apple will at some point in time have a billion paying customers.