Apple announced iPhone 5 pre-orders for this Friday, September 14th, and Canada is included in the first wave. We never heard a specific pre-order launch time from Apple, but Apple Canada’s online chat has answered the question.

Pre-orders will start just after 12:01AM PDT in Canada (or 3:01AM EDT), and according to the Apple rep, nano SIM cards will not be included so you’ll have to acquire them from your wireless carrier or an Apple Store. 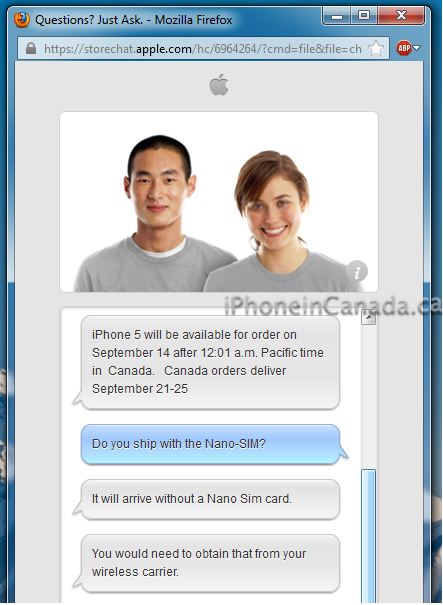 The dialogue above notes pre-orders will deliver by the September 21st launch in Canada, and a few days afterwards.

It notes the nano SIM card is not included and, however we independently confirmed with an Apple rep on the phone that it will be indeed included. As for the 12:01AM PDT pre-order time, the rep we talked to on the phone said “it was set for 12:01AM PDT earlier” but Apple removed that promise in the event their website crushes from iPhone 5 traffic.

When the iPhone 4S was available for pre-order last year, Apple.ca allowed customers to pick which microSIM they needed and included it as part of the order. Are you going to pre-order your iPhone 5 from Apple?

Update: Apple has confirmed the 12:01AM PDT pre-order time to Wired.