Apple.ca Now Allows Reserve and Pick Up for the iPhone 5

Looks like Apple Canada has started Reserve and Pick Up for the iPhone 5, as noted on their retail page:

Buy iPhone with contract and we’ll help you choose the right voice, data and texting plan. Then we’ll get you set up before you leave the store.

Request a reservation now and pick it up in store. Limited quantities are also available for walk-in purchase on a first-come, first-served basis.

Note this reserve and pick up service is only for those looking to sign contracts with their new iPhone 5 units. Unlocked units are still unavailable for purchase in store and are only available online (availability shows 3-4 weeks).

Once you click that ‘Reserve’ button you’re taken to this page to select your store and iPhone 5 model–note reservations are only available between 7AM and 1PM daily: 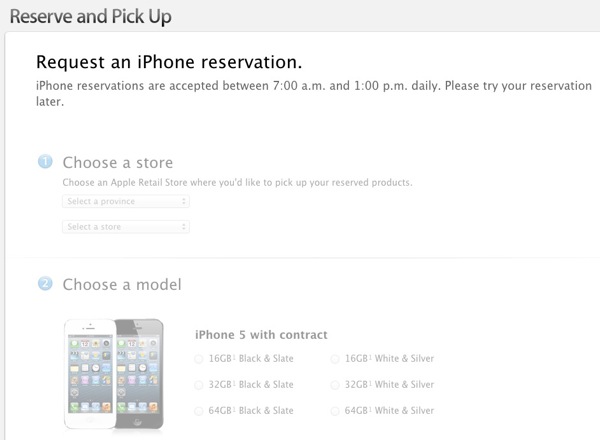 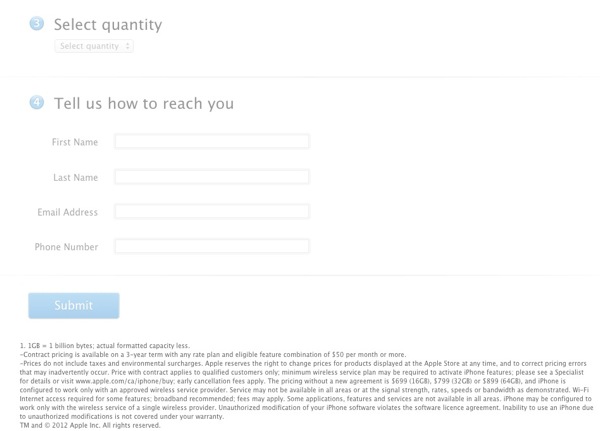 Here’s some fine print that notes 3 year terms require a minimum monthly plan of $50; prices are also listed for locked units without agreements:

-Contract pricing is available on a 3-year term with any rate plan and eligible feature combination of $50 per month or more.

We first let you know Apple retail stores would not be selling unlocked iPhone 5 units just prior to the launch, something Apple did not communicate to us. A recent rumour noted unlocked units could possibly become available in late-November.

The Reserve and Pick Up option is your best way to guarantee yourself an iPhone 5 if you’ve been on the hunt for one.

If you’re really desperate for an unlocked iPhone 5, you could buy one without an agreement and try your luck with iPhone unlocks via eBay. You’ll pay more, but you’ll have your unlocked iPhone.