A new exclusive aerial video of Apple’s “spaceship” Campus 2 construction site published today by AppleInsider shows major progress on both the “spaceship” ring and parking garage. The latest footage was captured earlier this month and shows over a dozen massive cranes working on the mega project. 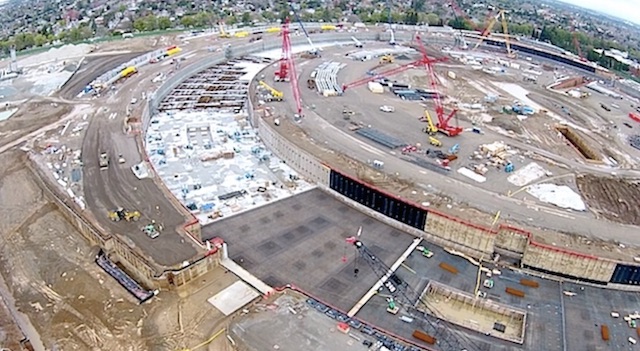 The source notes that “despite the early darkness of winter and unusually torrential rains”, work on Apple Campus 2 has continued at an aggressive pace. The new video shows the compacted soil fill of the excavated spaceship ring structure is now completely covered, while concrete is now being laid out to build a floor structure. Also, the site of Apple’s underground theater is now more clearly defined, surrounded by a bank of fill that will later be covered with trees.

“Earth ramps extending down into the ring floor are all gone; vehicles access is now provided through channels that will eventually connect to a rebuilt Pruneridge roadway that ducks underground to send cars beneath the surface to either the basement of the ring or to the two large parking structures at the south end of the site.

The theater site will include a 120,000 sq ft “assembly space” with seating for 1,000, kitchen facilities and a large lobby area. In September, the theater escalation was a shallow pit. Behind the theater area, Apple maintains a series of buildings along Tantau Avenue, although some of these structures now appear to have been vacated for eventual demolition”.

The first of two massive parking structures is now nearly assembled up the third floor. Check out the following video for a better idea: