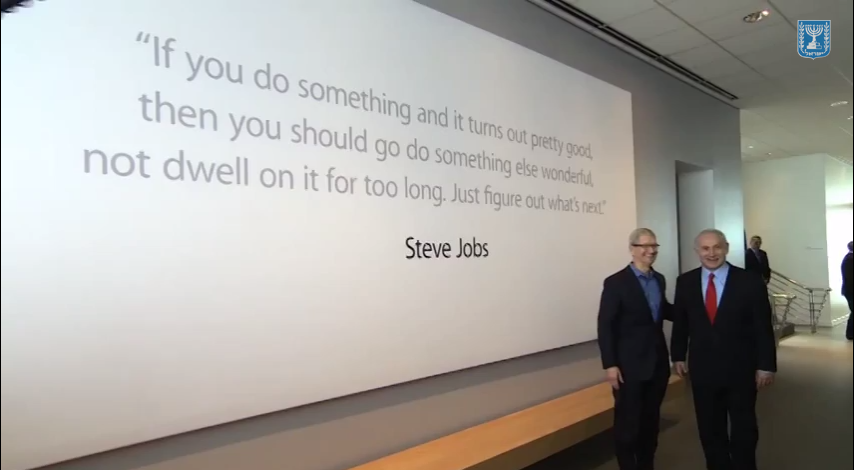 Netanyahu is currently travelling through the U.S. for the annual American Israel Public Affairs Committee conference. It is still unclear what Cook and Netanyahu discussed over lunch yesterday, but Apple has seen its relationship with Israel grow over the past few years.

Over the years, Apple has acquired Israeli-based companies PrimeSense and Anobit, in addition to hiring talent for a new research and development center in Haifa, Israel.

Below is a short video showing the Israeli leader meeting with Cook, which was posted to Netanyahu’s official YouTube page on Thursday.

The video starts with Cook and the prime minister staining in front of a large poster, which contains a quote from Steve Jobs that says:

“If you do something and it turns out pretty good, then you should go do something else wonderful, not dwell on it for too long. Just figure out what’s next.”

The attendees of the meeting has not been released, although you can see Apple SVP of Legal and Government Affairs Bruce Sewell sitting next to Cook in Apple’s Executive Briefing Center.

Over the past week, the leader also met with the founders of popular messaging app WhatsApp, which has been acquired by Facebook, as well as the president of Stanford University.