An SEC filing today noted Apple CEO, Tim Cook, sold $11.1 million dollars worth of Apple stock, or 20,178 shares, through five transactions that occurred at various stock prices in the range of $547-$551. The Securities and Exchange Commission (SEC) filing was noted earlier this afternoon.

Back in August of last year, Cook was awarded 1 million restricted stock units (when he was appointed CEO; he responded to my congratulatory email), with half to be vested in August 2016, and the other half in August 2021, to ensure he stays employed with Apple to get paid. Apple’s stock currently is at record heights, making it the largest company in the world by valuation, which has already exceeded half a trillion dollars. 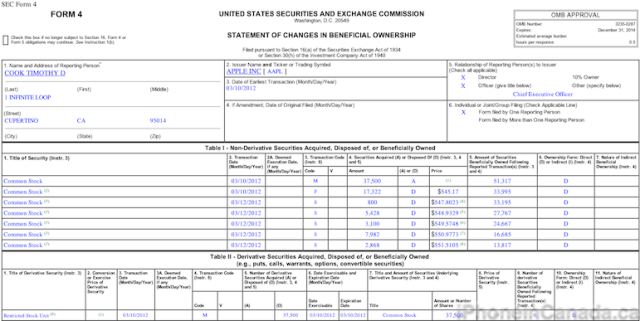 In late February last month, Tim Cook noted during Apple’s shareholder meeting the company was still set to release products that ‘will blow your mind’. One of those was announced last Wednesday, the new Retina Display and LTE-enabled iPad, which launches March 16th in Canada, the U.S., and other countries as part of the first launch.