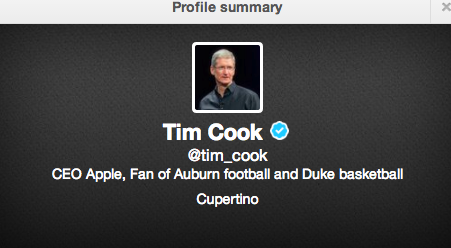 Amidst the iPhone 5s launch frenzy, Apple CEO Tim Cook has joined Twitter. Earlier, some were skeptical of the account as being fake, but it’s now verified. Below is Cook’s first tweet after visiting retail stores in Palo Alto (he’s @tim_cook):

Visited Retail Stores in Palo Alto today. Seeing so many happy customers reminds us of why we do what we do.