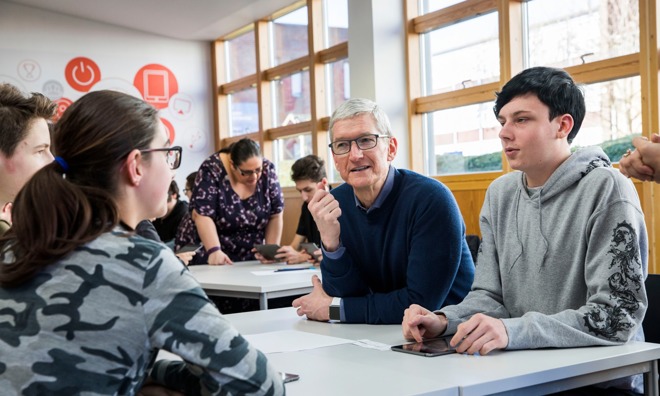 As a part of a tour in Europe to promote Apple’s new university coding courses, Tim Cook sat down for a wide-ranging discussion during his stop at Harlow College.

The first part of the discussion was about the utilization of technology both in and out of the classroom. Cook noted that even though Apple has an interest in promoting tech as an educational tool, but notes it’s not always the best option. He said:

“I don’t believe in overuse [of technology]. I’m not a person that says we’ve achieved success if you’re using it all the time. There are still concepts that you want to talk about and understand. In a course on literature, do I think you should use technology a lot? Probably not.”

Cook said he considers social media usage among children problematic. Even though Cook did not elaborate, he said:

“I don’t have a kid, but I have a nephew that I put some boundaries on. There are some things that I won’t allow; I don’t want them on a social network.”

Cook then talked about the role of coding in education saying:

“I think if you had to make a choice, it’s more important to learn coding than a foreign language. I know people who disagree with me on that. But coding is a global language; it’s the way you can converse with 7 billion people.”

Earlier today, the company announced that an Apple-designed course called “App Development with Swift” would be coming to approximately 100 colleges and universities in Europe.

The Dyson V12 Detect Slim makes some significant quality of life improvements while not compromising on power. I’ve been using Dyson vacuums for the better part of three years. Across many of its previous cordless devices, I’ve been thoroughly impressed. Dyson typically delivers when it comes to power and suction. Plus, I’ve often found battery...
Steve Vegvari
27 mins ago