Apple Adds Coding Sessions for Kids to its 2016 Summer Camp

Apple has included coding and robotics sessions to its 2016 Summer Camp, free registrations for which are now open for kinds in the US, the UK, China and Canada. For those who aren’t aware, an Apple Camp is a free three-day program for kids ages 8 to 12 held at select Apple Stores, and is aimed at broadening their creative horizons by making movies, creating interactive books, and more using Apple products. 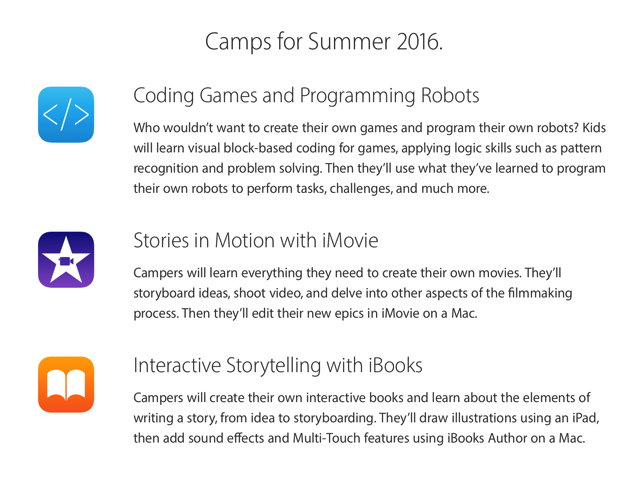 While Apple has hosted Apple Camp for years, this is the first time it has offered this “Coding Games and Programming Robots” course. The debut of the new coding class comes at a time when Apple has been increasingly focused on helping to introduce coding to younger users. At its WWDC event, the company debuted a new iPad app called Swift Playgrounds which teaches kids to code in Swift.

The new coding and robotics camps will run alongside the two existing options in which children are invited to use iMovies and iBooks Author for filmmaking and interactive storytelling.

To find an Apple Camp near you, click here.

Just two months after its launch, OpenAI's ChatGPT has reached 100 million monthly active users making it the fastest-growing consumer app ever, Reuters is reporting. In comparison, it took TikTok about nine months after its global launch to reach 100 million users and Instagram 2 and a half years. According to a UBS study citing data...
Usman Qureshi
16 mins ago

With a $4.28 billion operating loss in Q4, Meta's Reality Labs division recorded a total loss of $13.7 billion in 2022, the company said in its earnings report (via CNBC). Back in 2021, CEO Mark Zuckerberg said Meta's future would be in the metaverse, a digital universe where people will work, shop, play, and learn....
Usman Qureshi
36 mins ago