With all the breakthroughs lately in ports of Siri over to the iPhone 4, iPod touch, and iPhone 3GS, some have wondered whether the voice feature will make it onto older devices.

Apple has confirmed Siri will not be supported on older devices, in response to a developer’s bug report submitted to Apple. The developer suggested Apple should make available a special build of iOS 5.0.1 to include Siri on it as a paid option. Apple apparently responded to this with:

Engineering has provided the following feedback regarding this issue:
Siri only works on iPhone 4S and we currently have no plans to support older devices. 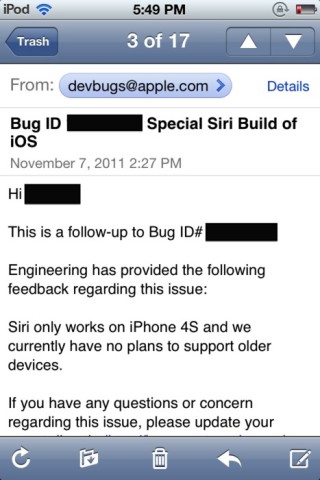 Siri will remain exclusive to the iPhone 4S–that’s a no-brainer. Siri is the one ‘major’ feature that separates the iPhone 4S from other iPhones. It’s similar to how only the 13″ MacBook Air has a SD slot, versus the 11″ Air. Users are put in a position to pay more for the 13″ if they want an SD slot. When it comes to the iPhone 4S, you must pay to play with Siri. There are no other options.

Microsoft has revealed the first wave of Xbox Game Pass titles arriving on the service throughout October 2022. Kicking off the month, many of the games capture the spirit of the spooky season, leading into Halloween. This month, Xbox Game Pass subscribers can gain access to brand new titles available day and date such as...
Steve Vegvari
56 mins ago