According to a report by Re/Code, a few dozen security guards dressed up as Apple Store employees in blue t-shirts marched in front of the Union Square Apple store today, calling on Apple to pay taxes on the $102 billion they said the company holds overseas. The protestors also handed out flyers which directed people to a website (www.techcandobetter.org) aimed for better wages for security guards at tech companies. 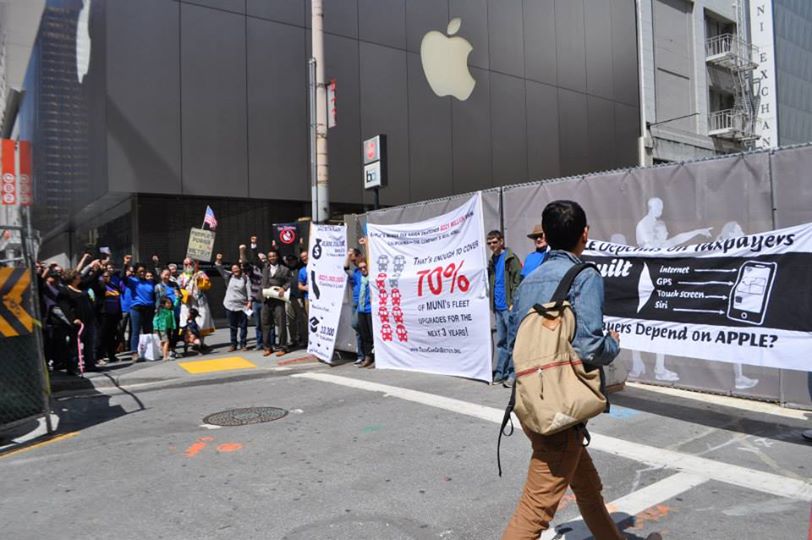 Alfredo Fletes, a union spokesman, said that they’re trying to have a little fun on Tax Day and show how Apple’s unpaid tax revenues could help Bay Area infrastructure. “We could have done this in Cupertino, but not as many customers would come by — this is partly an education campaign”, he said. Kehinde, the 31-year-old vice president of the United Service Workers Union (SEIU), added that tech is harder to unionize than other industries. “If Tim Cook said, ‘yes, unionize,’ other companies would follow”, he said.

“And they are always watching,” he said. “The officers have microphones on their uniforms, and someone is always listening for us. I was in the parking lot of Outback Steakhouse in Cupertino with an Apple security guard, and in less than three minutes eight security cars ambushed us. We weren’t even on Apple property. They’re listening. It’s kind of scary.”

“I’ve got the Google shareholder meeting on May 14th, then we also have the Apple developer conference coming up June 2nd in SF,” said Kehinde, who now lives by Lake Merritt and runs a soccer league on the weekends. “We’re still developing what kind of costumes we want to wear.”

The Apple store did not close for the protest, which lasted about 30 minutes.