Amid rumours of the next ‘iPhone 7’ dropping support for the 3.5mm headphone jack, a new Apple patent granted by the U.S. Patent and Trademark Office (USPTO) today has revealed a hybrid headphone design capable of both corded and wireless operation, AppleInsider is reporting. Apple’s “Detachable wireless listening device” can accept audio signals via a wire in one mode, and Bluetooth or other wireless protocol in another mode. 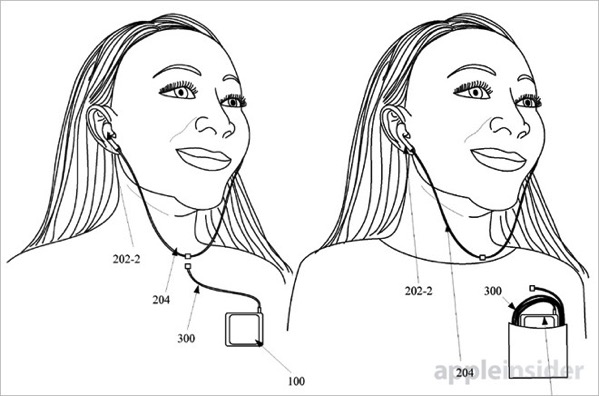 While the patent shows a device with a design similar to that of regular earphones, it also features a unique magnetic attachment mechanism that connects the earbuds and accompanying cable to the host cord for battery recharging and wired audio signal transmission. Once the cord becomes detached from the earbuds side, the system can be programmed to detect the state change, automatically pause the charging process and activate wireless communications.

The source points out that a hybrid earbud concept was first made public by Apple as a patent application shortly after the launch of the redesigned EarPods headphones with iPhone 5 back in 2012.

A closer look at the patent as granted reveals only minor changes from the 2012 application, the most prominent being mention of a magnetic attachment system in the patent’s claim construction. Previously, the filing only alluded to a vague attachment mechanism. An easy-to-use docking/charging interface is key in creating a pair of functional wireless headphones, and a design riff on the familiar wired EarPods supplied with all iPhones isn’t a bad way to start.

Do you think Apple will ship a pair of headphones with the same technology referenced in today’s patent with the next generation ‘iPhone 7’ later this year?