Apple Hard at Work On ‘Something’ Related to Health and Biosensors

A number of new hires and job listings suggest that Apple is hard at work on ‘something’ related to health and biosensors. As highlighted in an article at BuzzFeed, Apple has posted two listings for biomedical engineers with a background in “medical, health, wellness and/or fitness sensors, devices, and applications” over the past two months. A third listing seeks a lab technician with experience in biomedical or hardware engineering and health-related sensor technologies.

Over the last three or so months, Apple has snapped up employees from the medical world, according to LinkedIn. For example, Anne Shelchuk, who has a doctorate in biomedical engineering, left ultrasound software company ZONARE Medical Systems for Apple’s health technology team in November.

Craig Slyfield, a mechanical engineer who’s co-authored several papers related to measuring and visualizing human bones in 3D, also joined Apple as a product development engineer in November. Similarly, a hire in October was system design engineer Nathan Clark, who has a doctorate in biomedical engineering and a patent for a device that separates cells. 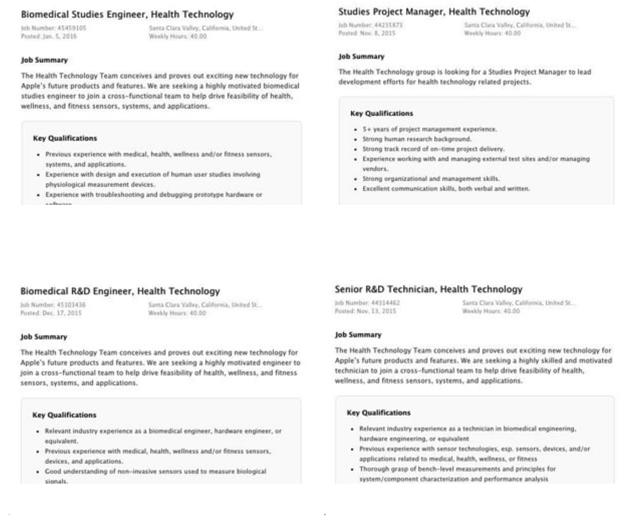 Also, Jennifer Hillier, a former exercise physiologist at University of California, San Francisco, and Seton Medical Center in Northern California, has recently joined Apple as a biomedical engineer, with job description on LinkedIn as “Top Secret.”

Call of Duty: Warzone Mobile may receive a regional launch. Apparently, the mobile-only spin-off of Activision Blizzard's hit battle royale is now available to install on Google Play in Australia. Earlier this month, Call of Duty: Warzone Mobile became available to preregister on the App Store as well as the Google Play Store. At the time,...
Steve Vegvari
16 mins ago