The U.S. Patent and Trademark Office (USPTO) has published an Apple patent titled “Interactive display panel with IR diodes”, that shows the company is looking to leverage its LuxVue acquisition to integrate display technology capable of reading a user’s fingerprint without a dedicated sensor. According to AppleInsider, the patent details a touch display that incorporates micro-LED sensing technology instead of the usual active matrix hardware. 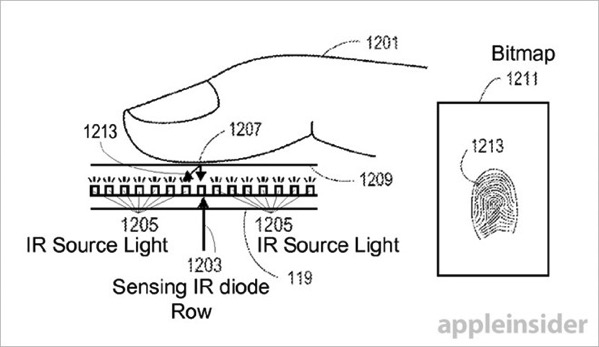 The patent lays out a design for incorporating touch panels and fingerprint sensors using hardware that can completely replace bulky capacitive sensor components with strategically placed infrared light emitters and sensors. The source highlights that some embodiments also add fuel to rumours of an ‘iPhone 8’ with full-face OLED display, featuring an “invisible” home button and Touch ID sensor. In order to achieve that, Apple may ditch Touch ID altogether and move to a new, more advanced system.

For example, a touchscreen capable of acting as an input device and fingerprint scanner would save space and grant greater design flexibility. Finding a working technology, however, is difficult, as fingerprint sensor readings need to be highly accurate, much more so than a traditional touchscreen.

According to the patent, micro-LEDs can be used as a surrogate for standard capacitive touch arrays. Specifically, separate IR emitting and sensing diodes connect to driving and selection circuitry to create a subpixel circuit. Due to their small size, these IR diodes can be embedded into a display substrate alongside RGB LEDs or on a microchip mounted to said substrate.

Apple’s micro-LED touchscreen and fingerprint reader patent was first filed for in June 2014. To lear more, head over to this link.