The US Patent & Trademark Office (USPTO) has today granted Apple a new patent that covers an innovative support stand for multiple displays, including a dual Pro Display XDR setup, Patently Apple is reporting. 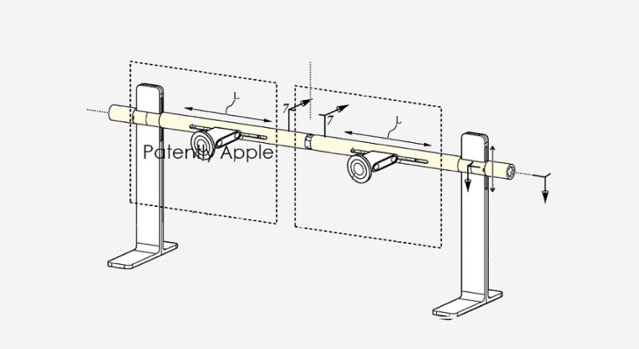 Apple details that when people use multiple displays in a workspace, the displays are generally supported by multiple different individual stands or by independently-movable arms, which not only take up large spaces but are also not aesthetically pleasing.

The company says its invention relates to features of a display stand for providing vertical, horizontal, and center pivot degrees of freedom for multiple displays.

According to Apple, the stand can have two legs spaced at end portions of the stand, that are linked by a horizontal support bar which can be adjusted vertically as well.

The shuttles can be horizontally movable relative to the support bar by using rollers or wheels that ride upon rails through the horizontal support bar. The rollers can constrain the movement of the shuttle devices along two principal planes of motion and can tolerate high moment loads about their moving axis/the longitudinal axis of the support bar.

You can get more details by reviewing Apple’s newly granted patent 11,371,644.

Apple announced this week its Maps team will be driving and walking across six Canadian cities next week. The Apple Maps team will be in Toronto, Montreal, Calgary, Vancouver, Edmonton and Ottawa from Monday, August 8, 2022. Apple says they will be “driving vehicles and wearing specialized backpacks with equipment to help us build the...
Gary Ng
7 hours ago