The U.S. Patent and Trademark Office has today published a new Apple patent titled “Earphones with cable orientation sensors”, that reveals an earphone invention which can automatically detect when its being shared between multiple users, allowing each user to hear a single audio track or two completely different songs, AppleInsider reports. The patent details how a variety of sensors are employed to determine the presence of one or more users, and subsequently output audio in single or multi-user mode. 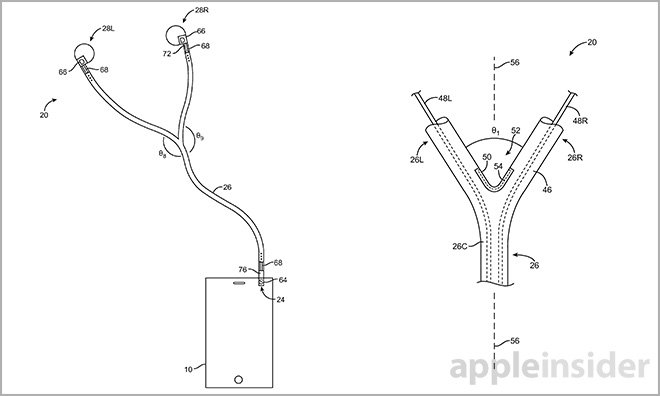 Apple notes that several viable sensor arrangements are used which involve mechanical switches, strain gauges, capacitive sensors and even light transmission via fiber optics. Then depending on an earphone’s design, sensing modules are disposed at specific points along an earphone’s cable, for example at the Y-junction joining left and right channel wires. Such an installation would rely on “angle measurements” to determine when an earphone is being shared by multiple users.

This technique incorporates sensors within a cable’s rubber sheath either as conductive lines or integrated with an internal support structure. Strain gauges and conductive lines can be located at the Y-junction to measures minute changes in angle between exiting left and right cable sections. When a measured angle surpasses a predetermined threshold, it is concluded that multiple users are sharing the device, which in turn triggers a specific audio profile.

Another technique involves capacitive sensors, applied as overlapping conductors again placed at the Y-junction. When left and right cable segments are spread apart the overlapping area decreases, thereby decreasing capacitance, a change that can be continuously monitored.

Apple had originally filed the earphone cable orientation sensor patent back in 2012.

Netflix has announced today they are rolling out the ability to great game handles, which are public usernames that can be used across the company’s slate of mobile games on iOS and Android. Supported games will have leaderboards such as Rival Pirates, Dominoes Café and Lucky Luna. How to create your Netflix game handle? It’s […]
Gary Ng
31 mins ago

Apple today started rolling out iOS 16.1 beta 3 for developers, with a public release of the build expected soon. YouTuber zollotech rounded up all of beta 3's changes in a recent video. iOS 16.1 beta 3 comes with a modem update that could resolve connectivity issues for users that were facing any, and other notable...
Nehal Malik
35 mins ago